By WOODROW WILKINS
March 25, 2009
Sign in to view read count 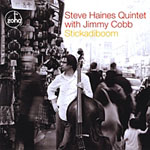 With so many jazz artists revisiting standards, it is refreshing when an album like The Steve Haines Quintet's Stickadiboom comes out, featuring all-original music.

Bassist Haines directs the Miles Davis Program in Jazz Studies at the University of North Carolina at Greensboro. He has recorded with some major names in jazz, including Branford Marsalis, Peter Erskine and Jimmy Cobb. His quintet is comprised of Rob Smith on trumpet and soprano sax, David Lown on tenor sax, Chip Crawford on piano and Thomas Taylor Jr. on drums. Legendary drummer Jimmy Cobb guests on several tracks.

The title song serves the dual purpose of representing the verbalization of the sound made by jazz drummers and the nickname given to Haines' dog. This jam opens with a score from Cobb, and then the horns come in, harmonizing on the melody. A series of brief all-stops gives each player a moment to solo, starting with Haines. Then, with the other musicians behind him, Smith takes off on an extended solo. Lown and Crawford follow; the latter sounding at first like a gospel pianist but later a hard blues musician. Piano and drums soften considerably for Haines' solo before the song shifts back into the melody. Cobb climaxes the piece with some stickadiboom of his own.

"Sutak 9-1-1" was written for John Sutak, a hockey player who had to make an emergency call during a tournament. He turned out fine and the song even better. This high-energy piece features Smith on trumpet, delivering a lead that has hints of Randy Brecker, Freddie Hubbard and Mile Davis. Despite being in the background throughout, Haines is a strong presence as Lown and Crawford each contribute solos. Cobb sets up the closing with an extended solo that recalls Buddy Rich or Max Roach.

Cobb wrote the closing "Composition 101," a lively piece that opens with trumpet and tenor harmonizing on the melody. Cobb sharply handles the hi-hats during Lown's solo and injects some nifty snare rolls when Crawford takes over.

Stickadiboom is as its name implies. Though Smith and Lown get most of the leads, it's the presence of Taylor and Cobb that gives each song the extra punch. Dedicated to Haines' parent, the band is tight for the entire set.