Stick Men at the Beachland Ballroom 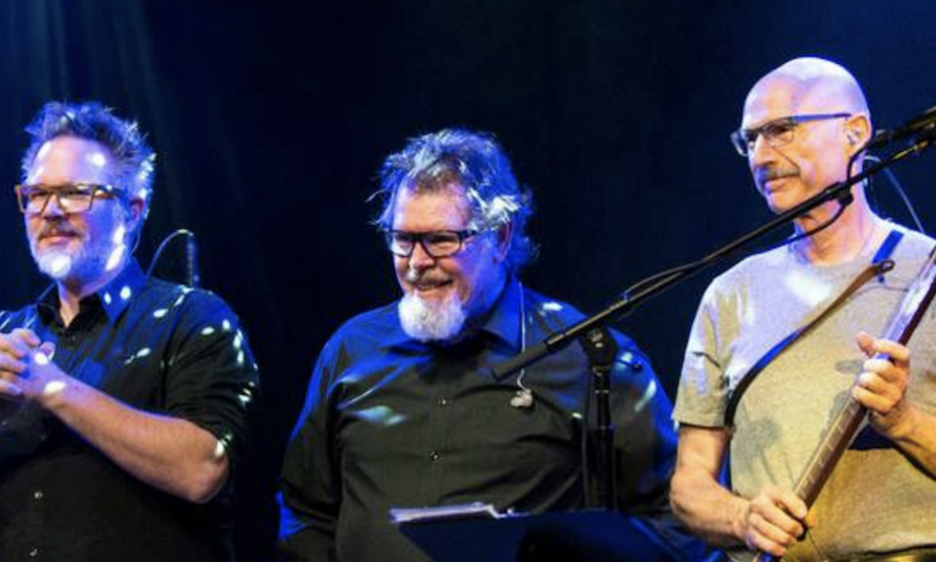 The audience at the Beachland Ballroom in Cleveland on August 4 witnessed the Stick Men develop a new canon for a new breed of instruments.

Markus Reuter and Tony Levin both play instruments that are less than fifty years old, Levin uses the chapman stick, an instrument he helped popularize as a solo artist and with Peter Gabriel and King Crimson. Reuter plays an AU8 touch guitar that he designed. Both string instruments are played by tapping your fingers against the fretboard instead of strumming or bowing the strings. The two touch instruments offer expanded harmonic possibilities compared to a standard guitar, with a range rivaling that of a piano, and the ability to play bass and chords at the same time. The touch technique creates a percussive effect that makes each song ring out with feverish intensity. Few trios are as heavy and bombastic as this one.

Levin and drummer Pat Mastelotto are both members of King Crimson and played together during the early '90s incarnation of the group. Reuter said that hearing "Elephant Talk," featuring Levin on chapman stick at the age of 18, had a large impact on his musical development.

"It feels natural, the way it should be," said Reuter. "It's like family."

Reuter and Levin's instrument occupy different niches, unlike Levin, Reuter can strum chords or fingerpick passages to add a different timbre that adds variety to the tapped instrumentals. The band's use of electronics and textures make the Stick Men truly stand out as a fantastic band, and not just a showcase for their instrumental technique. Mastelotto mixes electronic effects into his drum kit with sounds resembling woodblocks, xylophones, record scratches, and more adding a sense of mood to the music. The band understands that music is not just about that notes that you play but the mood and texture created by the sound, with Mastelotto even crinkling a water bottle into his microphone during the encore "Industry."

The set compensation kept the audience on its toes, balancing heavy songs with bass that turns your legs into jello with more ambient tracks. "Crack in the Sky" an ethereal piece based around a spoken word poem by Levin, features atmospheric guitar synths from Reuter, a stead beat from Mastelotto, and smooth gliding chapman baselines from Levin. After lulling the audience into a false sense of safety with this beautiful song, a loud, ear-piercing screech rose out from the stage, as the band launched into the 5/8 romp of "Larks Tongues in Aspic Pt.II."

"For this special kind of heavy music, the sound has to have a special kind of texture. The texture is a special combination of distortion and guitar synth elements," said Reuter. "It's also a function of how the pieces are arranged with the overtones and the intervals."

"Swimming in Tea" marked the apex of the Stick Men approach to mood setting. The piece felt like a tone poem based on a horror film, or a banned back issue of "Tales from the Crypt." Mastelotto began the song with xylophone hits and chimes, with Levin adding bass and Reuter creating a looping synth line before going in on the song with his signature distorted tone. The synths volumes swelled up to a feverish crescendo and screaming electronic voices, and creaking floorboards appeared like a wall of ghosts shuddering as the lights of Beachland danced around the room. This music that felt like a hallucination is reminiscent of Levin's work on Peter Gabriel's third self-titled album, where manipulated voices and cinematic sounds create a similar sense of creeping dread.

Along with playing with textures the band is an expert and playing with time signatures. "Mantra," a song from their latest studio album Prog Noir , is made up of constantly shifting measures of three and two, a song that is nearly impossible to clap along with but still fun to bang your head to.

"I remember when I first recorded this song, I couldn't stop listening to it," said Reuter. "I listened to this song on loop for 12 hours."

The opening band CuDa Shief & CuDa made up of brothers Chris and Tony Cuda, and drummer Matthew Shieferstein complemented the Stick Men perfectly, as you would expect for a band that has opened for the group 8 times. "Safari," with Chris Cuda's spidery flamenco-inspired tremolo lines, and heavy tom- based drums from Shieferstein showcased their songwriting abilities, with a false ending that rushed right back into an exhilarating groove.

"I read a book called Dark Star Safari, written by Paul Theroux," said bassist Tony Cuda. "As I was reading it every time he crossed a border I would write another part of the song. I wanted it to be an adventure."

Two bands with a taste for adventure created a concert that ducked and weaved and hit the audience like a skilled boxer. The Stick Men bent space and time for a show that demonstrated their unique approach to creating atmosphere as much as their unique instrumentation.