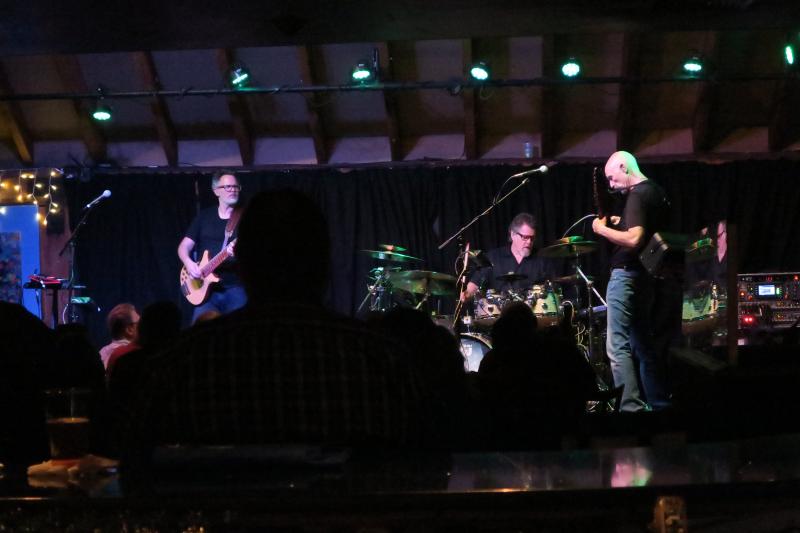 Stick Men look like a secondary project or side endeavor on the surface—probably inevitable since the members are most known in the progressive music world for being part of the King Crimson family—but there's a real difference between being a side endeavor and being a band. This trio has always stood as an entity all its own. Their mostly-instrumental variety of electronic space-jazz-rock does overlap somewhat with Crimson territory, most especially the experimental late-'90s subgroups known as ProjeKcts, but only somewhat. KC members Tony Levin (Chapman Stick) and Pat Mastelotto (drums, traps and buttons), joined by the similarly inventive Markus Reuter (touch guitar, synth), weave their smart compositions and sound-sculpting in a way that sounds like nobody else.

Their blistering set at New Hope's Havana bar made another demonstration of just how remarkable and finely honed the trio's virtuosity and chemistry have gotten after a decade in action (seven years for this particular lineup, as Reuter joined in 2010). The tropics-themed venue in the wilds of southeastern Pennsylvania seemed to provide an odd vibe for music so smart and heavy, especially on a rainy Tuesday. Levin said that it's become one of the band's favorite places to play, though, and it didn't sound like one of those rote lines that touring players give all the time. The members were all in fine spirits, and no less so than the fervently supportive audience, while the room's clear sound no doubt helped as well.

The good-humored vibe never went away through the night. Levin began the set by walking straight back offstage and leaving the other two to improvise a bit—it turned out he'd forgotten a strap for the Stick—and returned with some complimentary words about how good they are playing together. That's true enough, as shown by their several albums as a duo, but this was the briefest of preludes before the full band jumped into some finely stacked rhythms with "Hide the Trees." It's an effective opener with both intricate finesse and heavy-pounding crunch.

The guitarists' deft fingers are always a pleasure to watch dancing around their huge fretboards as they weave high tones and thumping bass parts, often at the same time. Of course there was good representation of the latest recording Prog Noir (Unsung Records, 2016), which is largely a much more dynamic and inventive affair than that title suggests. The title track still shows a smidge of overdone drama in the lyrics, but the semi-silly humor of "Plutonium" came out better (Reuter interestingly took over delivering the vocal part with an electronic filter effect).

Mostly, though, it was all about fascinating explorations in texture and sound. Levin mentioned that the smoky, mysterious "Crack in the Sky" was the first song these three wrote together, and he again gave some heartfelt words in explaining that it was a tribute to their now-departed friend Allan Holdsworth. Perhaps the biggest revelation was the extended free improv of "Open," which abandoned its loose rhythmic head patterns for swirling eddies of synth textures and powerful low-end punches from the drum stool. After some patient drifting and building, Reuter's not-quite- wailing guitar solo finally felt like breaking free of gravity and launching into the atmosphere.

A couple Crimson tunes still got thrown in as usual, though those can't entirely escape the feel of a greatest- hits-style, "because the fans expect it" sort of obligation. It's not that the performances of "Sartori in Tangier" or "Larks' Tongues in Aspic part II" were lackluster in any way—and not that they're anything resembling hits, for that matter—but Stick Men's own music is easily riveting enough to carry the day without any overt nods to their legendary cousin. Nonetheless, they tore through those pieces and rounded things off with a thundering "Level Five" before leaving us to gradually recover our wits. It's fairly remarkable that even such dedicated travelers can keep managing smaller tours so often when the beastly Crimson is also alive on the road, which is all the more reason to be happy and grateful that such inspiring outlets keep them all going.