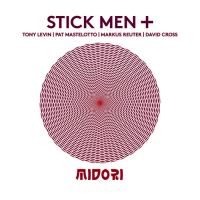 It was a short-lived but perfect pairing. Stick Men is an inventive rock trio, progressive in the truest sense of the word, including current King Crimson members Tony Levin and Pat Mastelotto and rounded out by the always-mercurial Markus Reuter. David Cross had served as Crimson's violinist in their early '70s jazzy-avant-proto-metal phase (though his tenure in the band never overlapped with the others'). When scheduling allowed them to come together for four Japan shows in April 2015, it proved to make just the right crossover material—the kind that brings out the best in everyone and produces a result greater than the sum of its parts. For fans of any or all of the names involved, hearing their two Tokyo performances is a dream come true.

Stick Men can already crank out a whole lot of noise for just three guys; the Chapman Stick lets Levin combine a rock-solid low end with fuzz-toned melody lines, while Reuter's synth guitar paints atmospheric swirls of color and Mastelotto expands the drummer's role with all manner of samples and electronics in real time. Cross's supple electric violin then gives the palette another range of shades entirely, whether he's jotting staccato notes or weaving fleet smooth-as-silk melody lines. The combination produces a mesmerizing web of sonics that constantly shifts and flows as they play off and respond to each other.

It makes for an exciting and adventurous set, capable of both slow gorgeous ambience and high- voltage thunder fierce enough to peel the varnish off your speaker cabinet. These are players who know the value of dynamics, never stop listening to each other, and understand that leaving space is as important as filling it. The quartet is willing to let the music unwind at its own pace; each set starts with an extended layered soundscape from Reuter before the others join in to gradually feel out how things are going to go. There's no need to rush to get to the loud moments, which only makes them more powerful once they arrive.

Fittingly the early set has a higher proportion of the more tentative explorations, while the late show is their time to flatten the room. Almost every written piece is a scorcher—"Sartori in Tangier" almost flies off the rails underneath Cross's fiery Arabian snake-charmer solo—but through the course of Midori, it's in the improvisations that this group shines brightest. The off-the-cuff musical dialogues can offer cloudy abstractions or sinuous rhythmic grooves according to the mood of the moment. Particularly noteworthy is each set's "Shades of Starless," which builds the Crimson song's iconic theme into a slow melodic sound sculpture before they ramp up to the roaring finale.

Stravinsky's "Firebird Suite" is arguably the one piece that doesn't belong (dramatic as it is), but one iffy song selection isn't too much of a low point to complain about. Otherwise the group manages an impressive consistency in quality for a set that's over one-third improvised. Such endeavors always bring a little uncertainty, but Midori is one instance where an un-tested chemistry goes fleetingly, beautifully right.