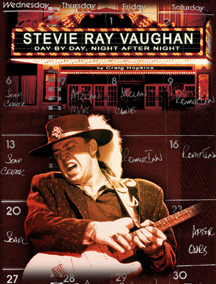 What this is has little directly to do with his tone, monster technique, clothing choices or even stage presence. This "IT" has everything to do with the fact he played with the same intensity in front of five people as five thousand people. He knew he had a physical gift (huge, strong hands and forearms), but, more importantly, he knew he had the gift of direct communication from his soul to that of each individual listener through his music, and that this was a spiritual thing. He gave it his all, his entire being, every note, every night.

Vaughan almost single-handedly revived the blues in the '80s, bringing it to a new generation who could now appreciate the deep emotional power of this seemingly simple music.

Author Craig Hopkins has spent almost twenty years collecting every scrap of information, including tour lists and set lists, about Vaughan that he could find and verify about his life and works, almost day by day. Hopkins himself asks about the book, "Is it a biography? A chronicle? A 10,000 piece puzzle? A doorstop?," and his greatest strength as an author is that he is hardly there. Most of the actual words are quotes from personal interviews with those who grew up with, played with, lived with and loved Vaughan, arranged chronologically. When needed, Hopkins provides connecting thread to keep the story moving.

The result is that in Stevie Ray Vaughan: Day By Day, Night After Night, Vaughan the guitar god is made into a three dimensional living, breathing, crying and introspective human being, with his early years being particularly strong. "Early" here means before the Rolling Stones, David Bowie, booed 1982 Montreux Jazz Festival, Texas Flood explosion which vaulted Stevie Ray Vaughan and Double Trouble onto the world stage, seemingly out of nowhere.

As this wonderful 400+ glossy page, 8 1/2" x 11" book unfolds, the shy, scrawny kid, who only wanted to keep up with and hang with his older guitar-playing brother, Jimmie Vaughan, latched onto the guitar, and devoted himself one-hundred-percent to mastering the instrument and getting inside the music and playing styles of his idols, which included Albert King, Albert Collins, B.B. King, Freddie King, Buddy Guy, and Jimi Hendrix.

It is very tempting to re-tell the story here, but suffice it to say that the end result of reading this book is to watch a video of Stevie Ray Vaughan performing and to be able to see the young kid inside the grown man who is playing his heart out. For two late examples of his no-holds-barred style, see these two clips from the 1989 Presidential Inauguration Concert: with Albert Collins playing "Frosty" and a blistering rendition of his theme song, Texas Flood, complete with a string break. He is clean, happy to be alive and "flooring it."

At Vaughan's last gig, the Alpine Valley Music Theater Festival, Eric Clapton says it all about Vaughan's set which immediately preceded his own:

"[It was] beyond anything I could even describe. I think the best way to describe it was to have been in my shoes in the dressing room watching the monitor—I could sit in my dressing room with the door open and hear him from the stage and see him on the TV—knowing I had to go out later and play. And what was happening was, I was actually so bowled over and so in love with this guy that was playing on stage from the heart completely, you know, that I started to feel ashamed of what I was going to do. 'Cause I was gonna go out there and do Cream songs and do different kinds of music and here was one guy playing one kind of music in one kind of way, and it made me feel, 'Are you ever gonna be like this?' That's the way I felt: 'Are you ever gonna get to that point, the point you are watching right now?.'"

Visit Hopkins' site for everything Stevie and information about this historically important book.