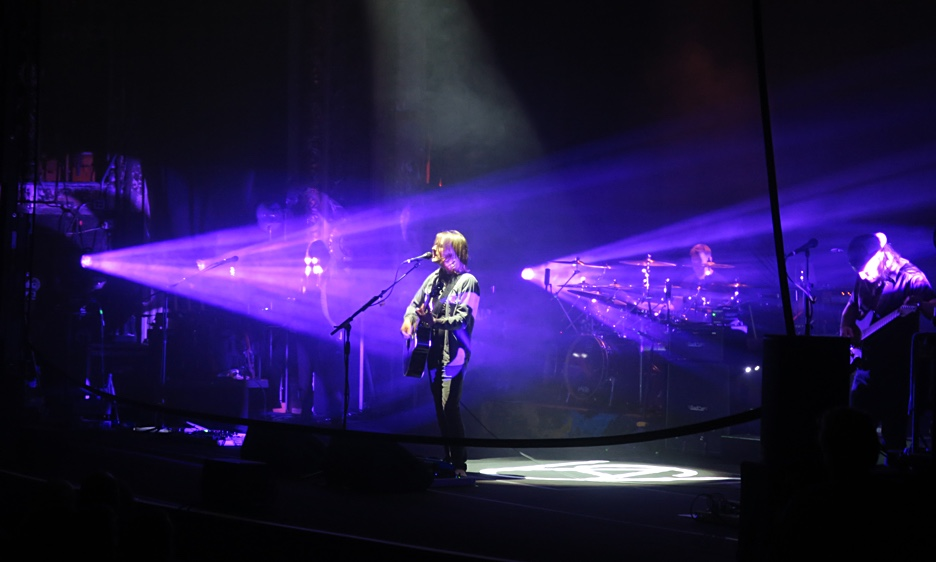 If rockers are usually supposed to slow down and lose their edge as they get older, Steven Wilson obviously missed the memo. He's a little way behind the departing or retiring rock royalty of the '70s (not that they've all become dinosaurs either), but he seems to be only getting more fired up as his solo career progresses. His restless insistence on mad genre-hopping does make a pretty good way to avoid ossifying into stone: To the Bone (Caroline, 2017) packs a lean punch that rocks in a way heavy and smart, and in a live context he and his band took it all even heavier and smarter.

Wilson had some nice words for the Philadelphia-area theater that he estimates he's played more times than any other in the USA, though he also hinted that a shift toward standing venues might suit his musical direction in the future. This show ("a big sexy rock and roll experience," he laughed at one point) had a practically ferocious vibe in contrast to the more jazzy art-prog of past tours. Things kicked off with a buoyant catchy "Nowhere Now" that would have had a standing floor hopping from the start, quickly followed with a promise of even livelier music and "some serious disco dancing" to come later. It was indeed a blistering performance and the Keswick crowd still spent a fair portion of the night on their feet.

Most of the set came from To the Bone and its denser and subtler predecessor Hand. Cannot. Erase. (KScope, 2015), whose tracks still came out intense enough to shake the floor amidst all their twisty instrumental turns. As always, Wilson is backed by a crew that can handle a dizzying mishmosh of genres while capably bringing the crunch. The relatively new-ish Craig Blundell is probably the hardest-hitting powerhouse drummer to appear on one of his solo tours, while debuting guitarist Alex Hutchings brought an impressive blend of muscle and finesse.

Even with this group's firepower behind him, a reference or two to "my old band" inevitably snuck into his extensive between-song banter all the same. Wilson didn't actually mention the name Porcupine Tree, but that outfit does remain the most well-known part of his past—and having declared a reunion off the table, he's apparently grown more comfortable in presenting that material as part of the bigger catalogue under his own name. A surprising half-dozen PT tracks made scattered highlights through the set, notably a crazy-thrashing "The Creator Has a Mastertape" and a most welcome return of the sweepingly lush "Lazarus."

Wilson was more at ease in delivering off-the-cuff chatter than ever before, good-naturedly joshing about some cliches of the prog-rock world and asking for help in naming his newly-acquired 1963 Telecaster guitar. The show's only lull came in introducing the exuberant ABBA homage of "Permanating," where his defense of upbeat pop came dangerously close to lecturing rather than bantering. Still, the set soon found its feet once the music started again—yes, complete with dancing through the room as promised—and sizzled from there to the finish.

If anyone didn't care for a colorful touch of disco, there was more trippy space-rock weirdness right around the corner. Miles Davis alumnus Adam Holzman injected a fierce jolt of fusion keys and a share of psychedelia throughout the night when he wasn't adding fascinating quiet textures. At the low end, Nick Beggs might have been the most well-rounded player on the stage with a rock-solid rhythmic foundation and supple jazz-inflected chops on both bass and Chapman Stick.

The performance would have been plenty by itself, but Wilson's longtime multimedia interest means adding another layer to the experience. The band played a handful of pieces behind an onscreen projection while most others were accompanied by behind-stage videos. Most of the footage made for an interesting complement to the themes or stories behind the songs: some even got a bit disturbing, such as a cartoon for "People Who Eat Darkness" that looked like Hitchcock's Rear Window as imagined by H.P. Lovecraft, while the the cosmic space-rock of "Song of Unborn" had a vaguely spiritual video to end the night on its most uplifting note.

It was an apt summation of what Wilson is about: any flashy playing was secondary to the songwriting and band chemistry, and any bleakness to the music got balanced out with some degree of hope. No wonder he's stayed so successful in not joining the dinosaurs.