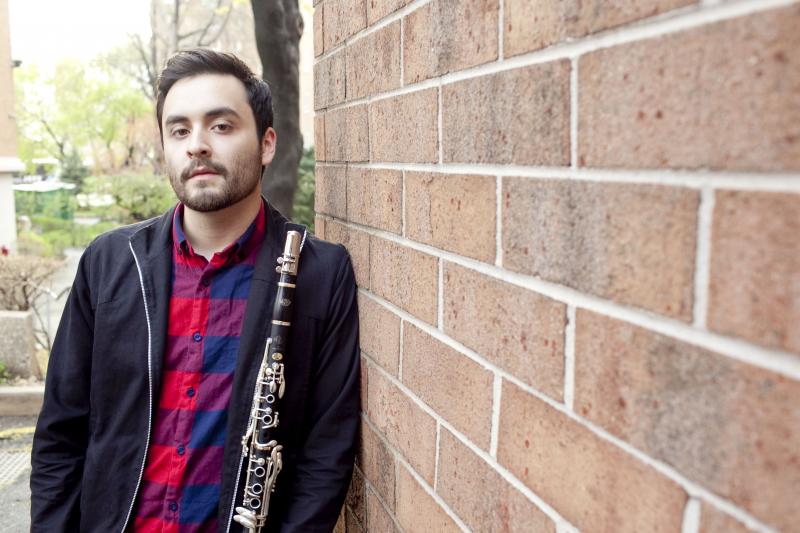 By DANIEL LEHNER
February 21, 2014
Sign in to view read count
Eric Dolphy once mused, "When you hear music, after it's over, it's gone, in the air. You can never capture it again." Luckily for fellow multi-reedist Steven Lugerner, that's a piece of wisdom that the Bay Area musician did not take at face value. For his release, For We Have Heard, Lugerner devised a means of music making that seriously excited his band mates like Myra Melford and Matt Wilson. "Upon hearing it, they all freaked out," recalls Lugerner. "I didn't really know what to expect, but they were all like 'This is super happening! I've never heard anything like this.' I was actually kind of shock. I was thinking 'Maybe I'm on to something.'"

Essentially, Lugerner took the idea of compositions as vehicles for improvisation and ran it backwards. He recorded solo improvisations done by his fellow band mates, transcribed them, and used them as templates for writing compositions. Lugerner had explored the idea previous to this release with banjo player Angelo Spagnolo wherein short banjo improvisations were notated and flute parts were written over it, released and performed as a "cassingle" (a cassette tape that Lugerner can use to perform the piece live). "I can perform that music live with two amplifiers with a normal cassette player playing the sample. I performed it live and people are really engaged by it and are excited by it." The process has significantly opened up the way that the creative process is tracked. "Somebody put it in terms that it was layers of memory," he explains, "the first being something that you can't change and then you layer one on top of that and that becomes layer two. To my knowledge I don't really know anyone else who's doing this in particular, though they could if they wanted to, of course; it's not like they have a patent on it."

"For We Have Heard" is also an experiment in programmatic and (implied) textual material. Lugerner, raised both Catholic and Jewish but held to neither religion in any sort of dogmatic sense, has brought his thorough studies of Judaic text to create a somewhat singular work. "When I came to New York, I had a bit of an identity crisis, both musically and also spiritually, for lack of a better term. And I really had a hard time connecting with it, why I was spending so much time practicing and spending so much time hustling and all that. I actually began to study with a rabbi to officially convert to Judaism.

"We basically read the Torah and studied and talked about it. Actually at the same time I was studying with the rabbi, I was taking a class at the New School called 'The Hebrew Bible in Context' and that was a class that was geared towards reading the bible in more of a literary point of view, as opposed to a religious text."

The record explores the story of Joshua and Jericho. Though it is a popular story (and one that has its place in music with spirituals like "Joshua Fit the Battle of Jericho"), the minutia and specifics are not often explored in the depth that Lugerner chose to explore. For him, it was a challenge not only of musical depth, but also of religious/political one as well.

"The book of Joshua is the next book outside of the Torah (which is the first five books of Moses). There are a fair amounts of very ancient Torahs that include the book of Joshua, so it's actually like the sixth book of Moses. I was just interested in the story; it's very dramatic and theatrical. It's very different than Numbers or Deuteronomy. It's also kind of controversial. The ancient Israelites go into what was then called the land of Canaan and basically wiped out everyone. It's an interesting time in history whether or not it actually happened. It just presented an opportunity for the creative music making process, seeing if I could really push myself."

Though an "improviser" and a composer in idiomatic modes similar to what would be called "jazz," Lugerner palate is wide and takes from the compositional realm just as much as the improvisatory one. A major, long-standing influence, even down to the aspect of making Jewish-themed music, has been composer Steve Reich.

"He's huge influence, in particular a piece called the Daniel Variations," said Lugerner, "that and Tehillim, where he sets the rhythms of the hebrew psalms to music are two of my favorites. At the beginning of writing that music, I was listening to a lot of him. I also listen to a lot of Nico Muhly. I think his music is downright gorgeous and I think he's pushing it in a lot of interesting accessible ways. Just the whole 'chamber-pop' thing. There's a really great ensemble called 'YMusic'; they have a record called 'Beautiful Mechanic' which is great. A lot of what I was listening to and still do is modern chamber music. I really enjoy that aesthetic and that sort of seriousness of compositional involvement. I'm super influenced by a whole lot of jazz and also pop music like Dirty Projectors. I also had a few opportunities to play and tour with John Hollenbeck, so anything by The Claudia Quintet and what I was hired for, which was the Large Ensemble, and that music rubbed off in a really profound way"

Some of the musicians involved in the process, like Melford and trumpeter Darren Johnston, reside in the Bay Area and similar to how the bi-religious Lugerner has leaned towards Judaism, his bicoastal heritage, one split between the Bay and NYC, he has chosen to take his wares to San Francisco. Lugerner talked a bit about the growing scene within the Bay and the West Coast in general.

"I'm originally from here. I was pretty wrapped up in just growing up as a kid, but I would come back from school just periodically to the Bay Area and I would slowly but surely just find out what venues there were, who was playing, who was doing creative things, etc. Since I've been back, I've certainly had more time to explore even more. What I enjoy most about it is that it's more digestible then New York. You can really go to a show and talk to the musicians. Sometimes you see a show in NYC and it's like 'Hey, that was great, we should play sometime,' but that never really ends up happening because New York is so busy with everybody hustling 'their thing' that there's really no time for that. In San Fran or Oakland, I'd ask musicians that and it WOULD happen, either within that week or shortly after. That's been really encouraging. It's easier to grasp who you see eye-to-eye with musically."

Lugerner predicts a shift of focus in the next few years. "Though it may not be the forefront of what is 'new,' I feel like over time, that will change. With my experiences living there, I feel like there are a growing number of people that will go to Seattle, San Fran, etc. I truly feel that there's no reason why the West Coast can't be the next center of attention. New York is almost kind of a black hole of creativity. You can see great music in Boston, or Baltimore or Philly, but people will so 'Oh, but for weird creative music, I'll just go to New York for that," whereas on the West Coast there's no one city that's the main magnet pool.

Lugerner cites the impressive roster of musicians and venues that already reside and create unique music on the West Coast. Just some of those represented include Mark Dresser and Michael Dessen (San Diego) and Nicole Mitchell (Los Angeles), as well as venues like The Blue Whale (Los Angeles), Duende (Oakland), Red Poppy Art House and Center for New Music (San Francisco) and record labels like Table and Chair (Seattle).

He hopes to be able to put down roots and reach out alongside the left coast ASAP. "I haven't had a terrible amount of opportunity to go on the road on the West Coast but I hope to in the spring and I'm confident I can get a good number of people at each show and spread the word. So I'm very optimistic."