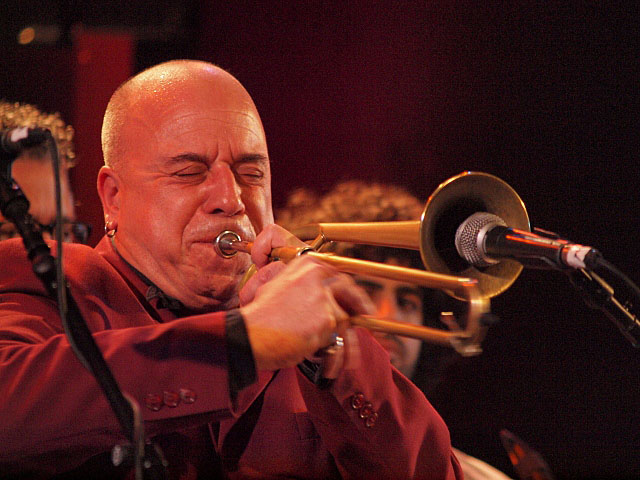 By EYAL HAREUVENI
March 5, 2011
Sign in to view read count
Steven Bernstein's Diaspora Soul & Nicole Mitchell's Indigo Trio
Tel Aviv Jazz Festival
Cinemateque
Tel Aviv, Israel
February 15-16, 2011
The 2011 edition of the Tel Aviv Jazz Festival did not feature big names but, instead, focused on musicians who have solidified their unique way of bridging the past with the future, musically speaking, but with much broader cultural aims.
New York Downtown trumpeter and arranger Steven Bernstein opened the festival with his Diaspora Soul septet— Bernstein on trumpet and slide trumpet, Paul Shapiro on tenor sax, Erik Deutsch on keyboards, Roberto Juan Rodriguez on drums and percussion—with local heroes Yakir Sasson on baritone sax, Assaf Hakimi on electric bass, and Gilad Dobrecky on percussion. This septet delivered clever arrangements of Jewish traditional holiday songs. Everyone in the audience knew these songs in their traditional form and melody—whether from family gatherings or via the education system—but few were prepared for Bernstein's highly imaginative and entertaining versions, first featured on Bernstein album Diaspora Soul (Tzadik, 1999).
Bernstein's arrangements took these songs through a busy and winding road of jazz history, from marching blues to swinging New-Orleans dances, referencing Dizzy Gillespie blend of Afro-Cuban rhythms, be-bop hard blowing, and even psychedelia and fusion elements—all done with tons of cool humor and joyful passion, and delivered with fantastic interplay from these great musicians. Bernstein dressed as if he were coming from a Las Vegas show, and was clearly so well-versed in jazz history, with a rich and multi-layered vocabulary, that it was a joy to hear every solo. Shapiro, a Bernstein collaborator for over thirty years now, developed the leader's ideas with elegance and beauty. Rodriguez is a massive drummer and, in this concert, bonded immediately with Dobrecky, as the two kept pushing the rest of the septet, with Deutsch sounding, at times, like a lost son of Stevie Winwood. The highlight of the set was the transformation of the prayer, "Avinu Malkenu," into an emotional blues—a reminder of how much is shared (and can be shared) by different cultures and traditions. 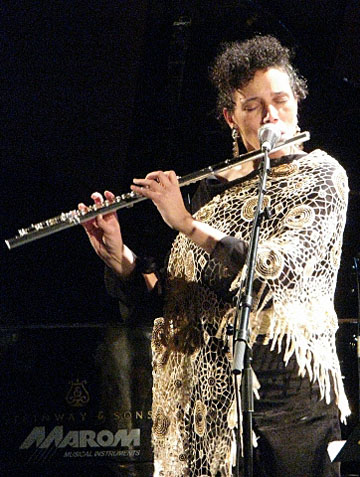 On the second night of the festival, Chicagoan flautist Nicole Mitchell and her Indigo Trio— with master drummer Hamid Drake and bassist Harrison Bankhead—brought their interpretation of the AACM movement (Association for the Advancement of Creative Musicians), from past to future. The trio was built on the endless rhythmic possibilities and constant groove produced by Drake and Bankhead—two musicians so total and powerful, that they could hold any gig by themselves, as soloists. It is always a joy to see Drake (who recorded a duet with Israeli sax hero Albert Beger the day before) dance beautifully around the drum set, coloring the vibrating rhythms with more textures and shades. Bankhead, who looked like Charles Mingus, was the trio's anchor, often playing both harmony and rhythmic structures at the same time, with sheer power, sensitivity and imagination.

Mitchell added short and beautiful melodic interludes, singing while blowing the flute. Her expressive playing balanced the intensive and muscular interplay of Drake and Bankhead, and even though Mitchell lacked the energy of her partners, she offered enough nuance and joy to the overall outcome.