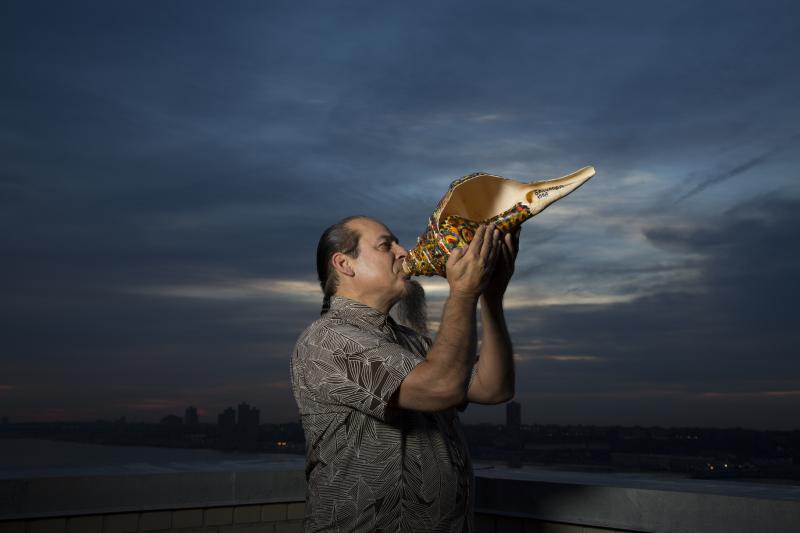 It's not an exaggeration to state up front that New York, jazz capital of the world, contains a virtually limitless variety of jazz music joys available to anyone on any given night, which can make choosing which gig to see, and where, no simple matter. For a few reasons, the third and final night of Steve Turre and an all-star ensemble at SMOKE was selected to be this correspondent's inaugural review for All About Jazz. First reason was personal: it was 9/11 in New York, always a somber day in the city, made heavier this year by a heat wave; but by late afternoon the humidity finally broke and a Sunday night out hearing music seemed to promise uplift. Second, the gig was at SMOKE, one of the best places to hear the music in the city. Third and most important part of course, was the music itself, and the artists making it.

Trombonist Steve Turre, 67, is one of the most accomplished players in jazz, with a blue chip pedigree whether viewed from his primary musical resume (Art Blakey's Jazz Messengers, Woody Shaw, Rahsaan Roland Kirk, Mingus Big Band), his side gigs (member of the Saturday Night Live band since 1984), or his work as an educator (on the faculty of Manhattan School of Music). In support or as leader, in the studio or on stage, it would appear that Turre is a pro who always brings his "A" game. And as leader, which he was on this Sunday night at SMOKE, Turre invariably surrounds himself with top pros, many of whom are leaders in their own right, who bring their best chops too.

Turre's superb crew this night included the intense Eric Alexander on tenor saxophone, the "thirteen-fingered" Mike LeDonne on the Steinway grand piano, David "Happy" Williams on the upright bass, and the renowned octogenarian Jimmy Cobb holding down the drums. The early set showcased five tunes from Turre's latest album on SMOKE Sessions Records, Colors For The Masters, four Turre originals and his arrangement of Antonio Carlos Jobim's "Corcovado," and provided plenty of color from this quintet of jazz masters.

They led off with "Taylor Made," a bright up tempo tune that featured a bracing opening solo from the leader's trombone followed by an outstanding tenor solo from Alexander, sounding clear and crisp out front despite appearing to be unhappy with the stage sound. "Quietude" took the mood down with its melancholy colors, Turre's darker trombone tones trading off with LeDonne's trilling piano. "JoCo Blue" was dedicated to John Coltrane, the tune being based on the great saxophonist's two-chord modal style. Alexander's chesty tenor and Turre's lush trombone in harmony for the lead solo before LeDonne got the tune rocking and Alexander cut back in, lacing the music with Trane quotes, short and long tones and octave jumps—a magnificent solo—leading into a sax-and-bone call-and-response section, resolving back to the modal theme to bring the exciting excursion to an end.

Turre dedicated the next tune, "Coffee Pot," to his trombone inspiration, the great J.J. Johnson, and featured Jimmy Cobb on the drums. A spunky, "caffeinated" tune with driving ensemble playing interspersed with solo tenor and trombone commentaries, "Coffee Pot" turned into a series of exchanges with drum breaks popping in and out of the piano-tenor-trombone ensemble; Cobb punched away at the skins and cymbals, the seeming ease with which he cut in and around the other instruments belying the sharpness of his hits. The audience was now fully jazzed, reminded that, hey, hold on, this is Jimmy Cobb, one of the hard bop rhythm kings, the guy who, a lifetime ago, powered the Kind Of Blue sessions. The feature spot was nothing less than a coolly conducted master class, and the audience loudly voiced its appreciation.

Jobim's "Corcovado" closed the set. As arranged by Turre, the go-stop go-stop samba shuffle of the bass and drums and LeDonne's moody, pulsing piano chords created a comfortable bed beneath his muted trombone, evoking the soft "quiet night of quiet stars" theme. Alexander soloed with support from Turre on Venezuelan maracas, before the leader picked up—could it be? —yes, picked up a conch shell and started blowing into the mic. For the uninitiated (and I include myself in that category prior to this performance), this raised eyebrows: was it, um, a gimmick or would it be musical? The answer quickly became apparent: this was extraordinary music of another dimension. As I later learned, since the 1990's Turre has pioneered, and mastered, playing seashells, especially conches of varying sizes; by cutting custom blow-holes in specially selected shells that can match certain pitches, he is able to create unique sounds -low guttural moans, high squeals, and a wide range of otherworldly sounds. By the end of "Corcovado," Turre had worked four different-sized shells to mind-expanding effect.

Turre's arrangements afforded the players ample space to present a unified theme, solo, lay out, jump back in and seemingly enjoy interacting with each other's ideas immensely. And the warm tone and melodic bends and slides of Turre's trombone added his own "colors," demonstrating a mastery all his own. Uplift on this somber day had been achieved.