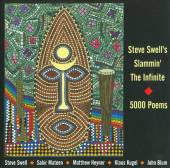 Using something that Walt Whitman said about prolific writing, trombonist Steve Swell posits that the more he creates—the more he writes and therefore performs—the more likely he is to produce something worthwhile. Although he does not mention it, this also suggests pushing the boundaries and being nonjudgmental about any of his work until he arrives at something of substantive value. What this might be is impossible to predict, until it is actually created and performed, and the response to it is presumably evaluated. In the event that all the pieces fit, the musicians, listeners and critics alike are wowed, and the process of creation goes on. Perhaps the act of creation goes on, irrespective as it might take a substantial body of work to find the music with heart. Thus, Swell's group, Slammin' The Infinite, and 5000 Poems.

Swell is certainly aware, of course, that infinity itself is finite somewhere along the time-space continuum, even though mathematics once suggested otherwise. Still, it is safe to use this proposition, or hypothesis, at least for the purposes of this album. So, tracks are seemingly interminable, soli intertwine like excruciatingly energetically charged particles of a constantly changing whole. Swell's growling and painterly smears bleat and splat at low or high velocity, as the trombonist bobs in and out of his solo, dancing around the saxophones or clarinets that Sabir Mateen might wield like a medieval apothecary, casting a mysterious spell with harmonic intensity. And both instruments are swathed in the dense ocean of rhythm and harmony from pianist John Blum, or bassist Matthew Heyner's and Klaus Kugel's rapid rumbling drums and shimmering cymbals.

The music is deeply exploratory. Titles may sound cold and dripping with irony, as in "Not Their Kind, " which is actually quite emotionally charged and accessible; "Sketch #1" and "Sketch #2" plunge into the infinite with vast tonal palettes that converge in mighty squiggles, as amorphous as complex cellular animals reproducing on a canvas. "Where Are The Heartfelt" is a dark almost forlorn cry, a kind of woodwinds and reeds chorus baying at the moon in agony. "The Myth of Perfection" dives into the heart and soul of the song itself as it searches, yet debunks the idea that there could be any such thing at all. But as it emerges from its musical expedition, a song as imperfect, yet beautiful as a natural gem could be is exposed. "The Only Way...Out" and "The Darkness Afoot" bend even further back than Whitman; possibly even as far back as Dante and the proverbial Inferno, a constant reminder of the circle of life, perhaps.

And yet, despite its bleak suggestiveness, Steve Swell's Slammin The Infinite works to quell negativity and make out as if the only thing that matters is the creation of something positive; something that might stand out and become what Whitman ended up creating: a song of epic proportions.

Not Their Kind; Sketch #1; Where are the Heartfelt?; My Myth of Perfection; The Only Way...Out; Sketch #2; The Darkness Afoot.