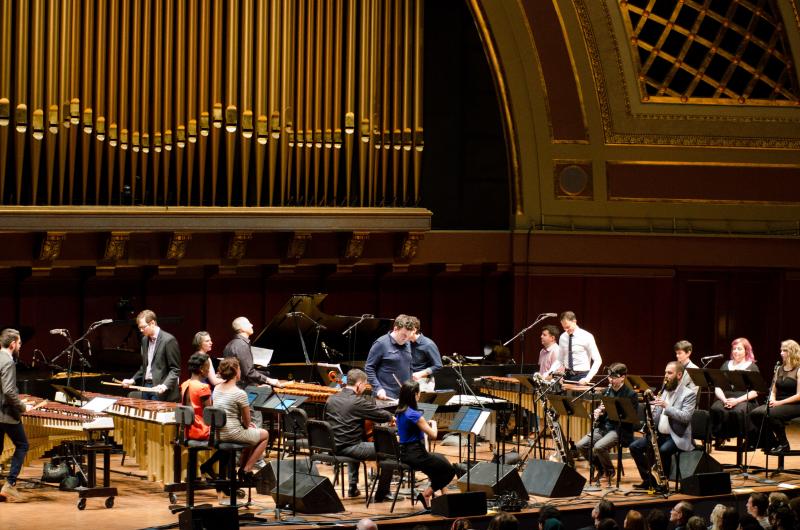 When it comes to contemporary classical music and specifically the genre known as minimalism, few composers lay claim to the accolades bestowed on Steve Reich. Celebrating his 80th year on the planet, Reich's works continue to be performed regularly around the world. In addition to concerts revisiting trinkets from his large oeuvre, two new pieces, "Pulse" and "Runner" have recently premiered in both New York and London. Definitely appealing to more of a cosmopolitan crowd, it is not without note that the University Musical Society based at the University of Michigan scored a major coup in drawing a rare performance of two major Reich works as part of their 138th annual season.

There are several threads that tie together the music of Reich, the two ensembles that assembled on March 18th to perform the works "Sextet" and "Music for 18 Musicians," and the University Musical Society. For starters, Bob Becker and Russ Harternberger formed a percussion ensemble back in 1971 called Nexus that first appeared in 1984 on the Power Center stage for UMS. These two men were also integral members of the groups that first recorded these two pieces on the Reich albums Sextet/Six Marimbas from 1986 and Music for 18 Musicians from 1978. Fast forward several decades and the ensemble Eighth Blackbird would debut at UMS in 2008 with the performance of another Reich piece, "Double Sextet." As for Third Coast Percussion, the group just won a Grammy Award for their 2016 recording of several of Reich's percussion pieces.

This well-groomed lineage was just a part of the success of a performance bringing together both Third Coast Percussion and Eighth Blackbird to perform as part of the 80th birthday celebration of Steve Reich. Both groups hail from Chicago, the former being a percussion quartet formed about 10 years ago. The latter was launched by a sextet of performers from the prestigious Oberlin Conservatory in 1996 and they have commissioned and premiered a host of major works, including Reich's Pulitzer Prize winner from 2009, "Double Sextet." Indeed, these musicians know the ins and outs of these works with a high degree of sophistication.

Up first in the program, "Sextet" is written for pianos, marimbas, vibraphone, bass drums, crotales, tam-tam, and sticks. Written in 1985, the twenty-six minute piece is made up of five movements with an arching form of A-B-C-B-A. Two-handed piano chords form a rollicking motion that ushers in the bustling nature of the piece, a somewhat aural equivalent of watching foot traffic on a New York street. When a moment of calm is ushered in by the marimbas, it's first voiced in a seven-note phrase and then eight notes, and so on. This layering effect is a basis for much of the piece's further development. Reich has said that in trying to provide a counterpart to the relatively short attack of percussion instruments, he decided to use a violin bow which is dragged across the sides of the vibraphone bars. As the two percussionists strummed whole notes in this manner, the otherworldly effect was a treat both visually and sonically to experience.

Following an intermission and change of the stage, the main event would take place as "Music for 18 Musicians" was presented in its entirety. When introduced, a comment was made that each musician served a role as their own "engine" in powering the whole performance. This was indeed the case, with repeated sixteenth notes undulating in a manner that propelled the forward motion. The seamless blending of bass clarinet and four voices made for peaks and swells that varied the overall sonic texture. Furthermore, key musicians would usher in new segments by either a head nod or a strategically played tone row.

It's not known for certain, but it has to be conceived that as a performer of such a piece you must need to lose yourself in the flow of the moment even as you find yourself repeating the same sequences over and over again. That is certainly what happens when you are in the audience as a listener. Time seems to go by the wayside and you find yourself carried away on a sonic journey that is pleasantly and significantly unlike a non-linear musical performance. To say that adding the physical element of observing the performers takes this type of music to another level is nothing short of understatement. It is indeed something to behold.

Thanks to the superb acoustics of Hill Auditorium, every nuance of the performance was heard clearly and succinctly. As the piece reached its conclusion, parts gradually started to drop out, leading to the finishing decrescendo. At the one hour and eight minute mark, the final notes vanished into the farthest recesses, the players stopped frozen, and thirteen seconds of silence swept over the hall. It was as if everyone needed a moment to take a breath and grasp the profundity of the moment.