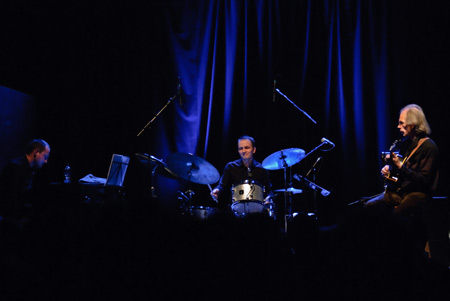 In the world of rock and progressive music—where technology is too often used just because it's there,and where stadium tours offer the only opportunities to hear the genre's giants—a chance to listen to a genuinely influential guitarist in an intimate trio session is a rare event. So when rock guitar great Steve Howe came to Norwich with his trio, a packed Arts Centre crowd had high expectations—and they were not disappointed.

The band played two sets, mixing Howe's own compositions with numbers from the Yes back catalog and a selection of jazz standards—the opening tune "He Ain't Heavy, He's My Brother," a hit for The Hollies in 1969, being the only exception. The music came in the main from the Trio's debut album The Haunted Melody (HoweSound, 2008) and their live album Travelling (HoweSound, 2010), which includes live versions of most of the former's tunes. The crowd was responsive, appreciating Howe's between-song stories as well as the performances. Most of the audience were Yes fans rather than jazz aficionados, greeting the opening bars of old Yes numbers with applause, but their reaction to the jazz standards was just as warm.

Howe played his trademark Gibson ES175 throughout both sets, making occasional use of a volume pedal but no other effects. The approach gave his playing a beautifully clean sound, especially on his single-note runs. The sound lent an authenticity to the jazz numbers—but it also gave a very different feel to the numbers taken from the Yes back catalog. The trio's versions of "Siberian Khatru," from Close To The Edge (Atlantic, 1972), and "Heart of the Sunrise," from Fragile (Atlantic, 1972), demonstrated how strong and melodic the songs are when pared down to basics. The latter tune featured particularly beautiful and precise playing from Howe, as did "Mood for a Day," Howe's solo acoustic guitar piece from Fragile, which he has now reworked for electric guitar.

Howe has long admired guitarist Kenny Burrell, and the trio's rendition of Burrell's "Travelin,'" a beautifully swinging, country-influenced number, was a highlight of the set. Miles Davis' "Tune Up," Rahsaan Roland Kirk's "Haunted Melody" and Jimmy Smith's "Blue Bash" also gave the trio a chance to show their jazz chops—the latter showcasing Ross Stanley's organ playing. Stanley and drummer Dylan Howe, Steve's son, are a perfect complement to Howe's playing—they can both play sensitively and emotively, but they can also crank up some funky rhythms to propel the leader's purer and more respectful approach, as they showed on Burrell's "Chitlins Con Carne," served up as the encore.

The mix of tunes resulted in an unusual and eclectic evening of music, while the trio's approach and the choice of a small, intimate venue went a long way towards creating a jazz club atmosphere—despite the fact that most of the crowd had to stand for the entire performance—and enabled an interaction between audience and performers that would be impossible in larger spaces. The Steve Howe Trio successfully mixed music and musicians from different genres and generations, bringing a fresh approach to well-established classics.