Steve Earle & Shawn Colvin at The Space at Westbury 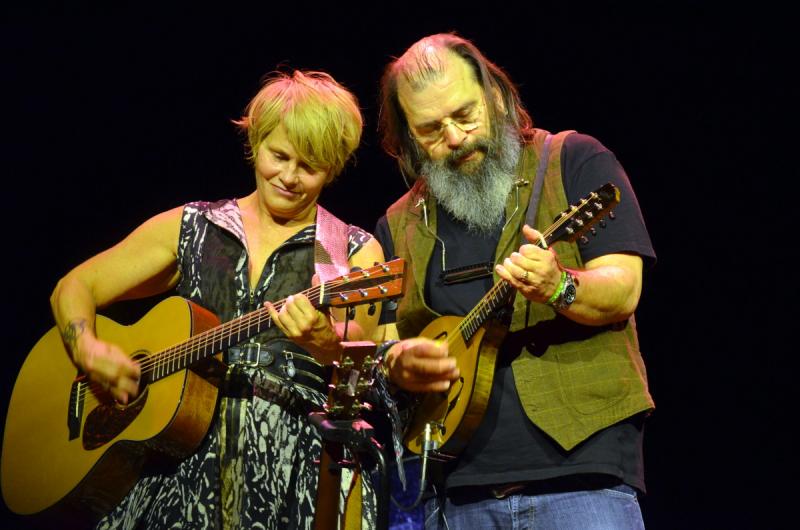 After opening the evening's performance with a short but sweet cover version of the Everly Brothers classic "Wake Up Little Suzie," Earle announced, "We'll be singing songs and telling stories on stage together tonight. I'll sing some. Shawn will sing some. We'll sing some together...and of course we'll tell some stories." As such, "Stories and Songs" was a completely appropriate name for the tour as both singers' song canons feature songs that tell vivid and wondrous stories about the human condition—the good, the bad and the ugly. Earl and Colvin sang with fire and conviction as their stories and the songs worked to provide the Westbury audience with a night to remember. The stories were fascinating and powerful; the performances were even more so.

Fans of both artists were treated to what audience members must have wished for—the hits and the meaning and creative process behind the creation of these songs. A prime example was the genesis and backstory behind Earle's "Devil's Right Hand." Earle explained that the song was originally about gun control though everyone thought so. This was especially so because Earle stated that he had his own (legal) collection of firearms. He further explained that it was actually about having an out-of-control teenager (his son Justin Townes Earle) and not, at the time, being equipped to handle him or to be the disciplinary parent. He talked about how "Justin had taken one of my shotguns and wouldn't tell anyone were he had hidden it." So Earle had the boy shipped to what amounted to a work farm for wayward teens. "It was all backbreaking work in a farm-like environment. No indoor accommodations; just tents in a field. And it was really cold out. After a day or so, Justin called me and told me where the shotgun was hidden."

Colvin then explained that Earle was the real storyteller. "My songs are all about breakups and bad relationships." She then sand "Another Long One." Earle followed with a heartfelt version of his ballad "Goodbye" (which he dedicated to Emmylou Harris and her mother, Eugenia, who had recently passed away). Colvin then sang "A Matter of Minutes" which she termed as a "song for the domestically challenged" and how the song was written as a response to "Goodbye." She followed it with a tour-de-force rendition of Gnarls Barkley's "Crazy." When the applause died down, Earle looked at Colvin and said, "Ballsy cover, man." He then turned to the crowd and explained, "That's the technical term. I have that on good authority from Bruce Springsteen." He then told a story of how he sang "Nebraska" in 1987 when he knew Springsteen and John Fogerty were in the audience. Later that night, he said that Springsteen came backstage and said, "Ballsy cover!" Then, not to be out-done by Colvin, Earle countered with a cover of his mentor Townes Van Zandt's classic, "Pancho and Lefty."

The show continued with "That Don't Worry Me Now," a duets on "Someday" (about which Earle explained was written as he spiraled deep into his drug addiction, and how by recording it, Colvin helped set his life in the right direction), "Fearless Heart," Colvin's "Diamond In The Rough" with Earle on guitar and backing vocals, "City of Immigrants" (about which Earle ruminated on living in New York City's Greenwich Village, the disappearance of the local deli/grocery and Mr. Kim the owner of the deli/grocery in his neighborhood).

Moving into the home stretch, Earle and Colvin sang a duet on "Burnin' It Down." Colvin then took center stage for what is perhaps her biggest hit and signature song, "Sunny Came Home" (which she explained was "the ultimate break-up song; it's a murder ballad"). Prior to playing the next tune, Earle retreated to the back of the stage where he had his mandolin. He explained that it was favorite instrument. About his beloved mandolin, he said, "I'm going through a divorce and if I get to keep anything it's this fucking mandolin." He then played a beautiful version of "Galway Girl," the autobiographical song about the beautiful girl he met in Galway, Ireland.

Earle explained that they each were currently working new albums, but he then added, "We're gonna do a record together next year. I'm going to do a blues record and then were gonna record our album and then do a tour." He then invited the audience to meet him and Colvin at the merchandise table where they would be available "say hello" and sign posters, CDs, records, tickets and the like. They then began strumming their instruments and performed a duet version of the Earle-penned "You're Still Standing There."

After a brief moment off stage they returned to another standing ovation for the encores. The first of which was a complete surprise—an even more countrified version of The Beatles' "Baby's in Black" that had it not been recorded 50 years prior would, in today's musical landscape, have been creating a special buzz as it climbed the Country Charts. They then closed with the expected performance of Earle's signature tune "Copperhead Road." Early joked when he introduced the song by stating, "We got to play this 'cause we want to get the fuck out of here alive."

When last seen, the pair were smiling, shaking hands and signing anything and everything shoved in front of them by the Long Island faithful.