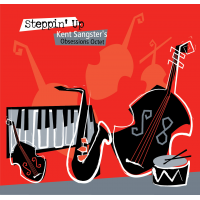 When Kent Sangster and his wife Joanna Ciapka-Sangster founded the Obsessions Octet in 2005, they brought together three strands of music: classical, tango and jazz. The Octet is divided right down the middle between the classical and jazz segments. Here it takes eight to tango and together they delve into that form of music. The classical string quartet: Joanna Ciapka-Sangster, Neda Yamach, Lianne Maitland and Rhonda Henshaw are regular members of the Edmonton Symphony Orchestra and the Alberta Baroque Ensemble. The jazz segment comprises Sangster, Chris Andrew and John Taylor and Jamie Cooper are members of the Edmonton Jazz Orchestra and Bomba!.

Steppin' Out is their third recording following Obsession and Melodia. The Octet builds on the successes of the earlier records with another enticing blend of music that is well balanced between the genres.

Strings herald "A Matter of Time" before it settles down into compelling jazz. Sangster explores the composition before unravelling some lyrical insights. He cuts deep into the groove spinning mesmerising ideas at every turn. Short interludes by bassist John Taylor and pianist Chris Andrews add to the dynamic.

"Thrones" has an artful blend of composition and improvisation showcasing not only the depth of the former, allowing the musicians to take flight and return to the nesting ground. The orchestration pulses, the strings seep into the groove as Sangster invents a welter of phrases that first caress the melody and then stretch it without fragmenting the base. The counterpoint of the strings and the cohesive support of piano and drums raise this to a high level of excellence.

Astor Piazzolla's "Milonga Del Angel" has mesmerising impact. The Octet is seamless as the stay true to the melody unveiling it with grace and an abiding sense for its beauty.

Funk makes for a great change of atmosphere. "Steppin' Up" provides that in spades with its churning groove, quick intersperse of the strings, the tumbling permutations of the EWI and a bluesy Rhodes. Heady and exhilarating, it uncoils with a snap bringing to a close a delightfully fecund musical landscape.