By GLENN ASTARITA
October 8, 2013
Sign in to view read count 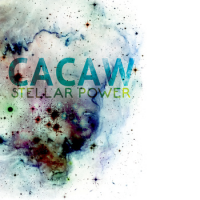 Cacaw evolved from an acoustic trio as a mechanism for keyboardist Landon Knoblock to merge his compositions with electronics, and a result of his affiliation with drummer Jeff Davis and saxophonist Oscar Noriega in a band that performed the music of jazz piano great, Andrew Hill. Time marches on, as Cacaw underscores its musicality with a hybrid avant-jazz and space-rock playbook like a Star Trek sojourn into a time warp emanating from the netherworld. It's all in good fun however, as the band's probing melodies, whirlwind unison lines, buoyant rhythms and radiantly detailed soundscapes are enhanced by the sparkling audio production.

The musicians' manifold game-plan includes anthem-like synth choruses, playful burnouts and placid interludes. But Knoblock fuses many variants into the big picture via his multihued keys and developments amid the trio's crash and burn episodes and free-form trajectories.

"Space Robot Falls in Love" commences with ethereal electronics, sparking notions of vintage Brian Eno ambient minimalist fare, contrasted by Noriega's soft sax lines and Davis' colorific cymbal hits. But they raise the pitch on "Electro-Darwinism," with intricate and complex unison lines, amped up by Noriega's seething notes and the quirky, popping grooves set down by Davis. On "Eyes Heart Race," they cover a gamut of counterbalancing plots and launch the festivities with Knoblock's massive fuzz-toned keys and Noriega's screaming sax parts. Here, they perhaps mimic an arena band performing jazz-rock but temper the pace with Knoblock and Noriega's warmhearted interlude. Hence, the trio's cosmological force-field yields a host of gratifying aspects, while maintaining an idiosyncratic line of attack throughout.