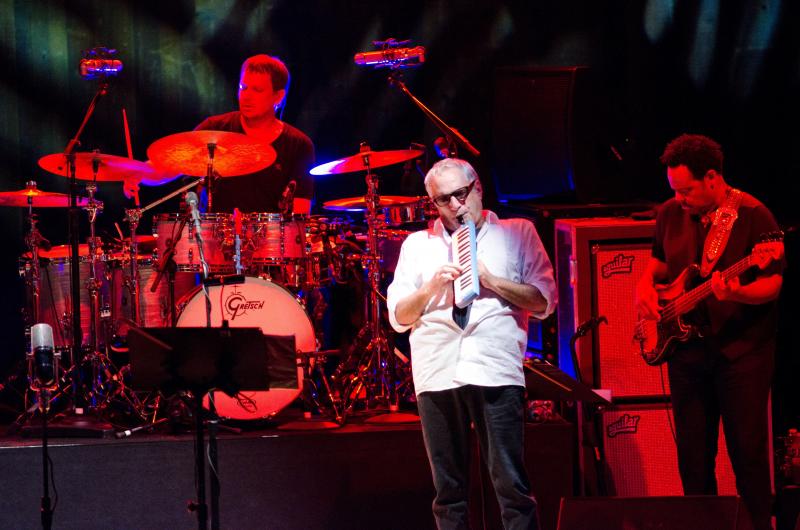 Back in April, Steely Dan got the busses loaded up for their semi regular touring season that included a few nights at Coachella. July 6th then brought forth the official summer tour, with twenty-three dates set through the middle of August. Billed as the "Rockabye Gollie Angel" tour, whatever the hell that means, The Dan brought its travelling minstrel show to Blossom Music Center in Cuyahoga Falls, Ohio on July 28th. It was the first time Donald Fagen, Walter Becker, and crew would appear at the outdoor amphitheater, which is located on 800 acres of natural woods inside the Cuyahoga Valley National Park, since September of 2006. It was also the first time the group returned to the {jny: Cleveland}} area since 2013, having opted for shows in {jny: Columbus}} and Cincinnati last summer.

Weather-wise it was a perfect night and about 10,000 people scattered on the lawn and inside the pavilion to revel in the music of Fagen and Becker, who as the latter pointed out, have been collaborating for close to 50 years. Powered by the superhuman drumming skills of Keith Carlock, this twelve-piece unit is chock full of immensely talented musicians and therein lies the attraction to a Steely Dan show. Even as the set lists seem to vary little from year to year, there is enough going on at any given minute to satisfy the tastes of even the most jaded listener.

Providing a fine introduction to the horn section (Roger Rosenberg, Walt Weiskopf, Michael Leonhart, and Jim Pugh), the band sans Becker and Fagen took to the stage for a spirited romp through Ray Bryant's "Cubano Chant." This paved the way for "Black Cow," as the crowd hailed the arrival of Becker and Fagen. Rosenberg wailed on baritone during his time in the spotlight, as did Walt Weiskopf during his tenor feature on "Aja."

Throughout the evening, Becker noodled between the spaces in Fagen's lead vocals, taking just a few solos of his own. Jon Herington's guitar figured more prominently into the mix, having to invoke such iconic solos as Jeff Baxter's from "Bodhisattva," or Larry Carlton's from "Kid Charlemagne," or even Jay Graydon's miniature masterpiece on "Peg." Herrington accomplished it all in spades, adding a bit of his own personality in the process.

"Time Out of Mind" presented a great opportunity for Becker and Fagen to spur each other on. The pair commenced to jamming at tune's end with Becker on guitar and Fagen up front on the melodica, a handheld, breath-powered keyboard. The Danettes (Carolyn Leonhart, Cindy Mizelle, and Paulette McWilliams), as Fagen so keenly billed them, would feature on "Razor Boy," which also included a bristling muted trumpet statement from Michael Leonhart.

Although Fagen runs a tight ship with little banter between numbers, Becker likes to hang in the moment. At one point he rambled on about how they intended to make the show turn into "the best fucking night of the summer." He would also lend his vocal chops to "Daddy Don't Live in That New York City No More" and introduce the band, while the ensemble wailed on the Joe Tex ditty "I Want To (Do Everything For You)."

Even as the close to two-hour show wound down, Herington would figure prominently in the mix with ripping solos on "My Old School" and "Reeling in the Years," Carlock getting an extended chance to burn on the latter as well. Customary for the last several years, "Kid Charlemagne" served as the encore, cell phone lights providing a nostalgic afterglow.