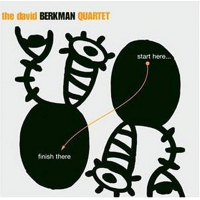 Pianist/composer David Berkman goes four deep into the Palmetto catalog with his new quartet release Start Here - Finish There. This new recording follows Leaving Home and Communication Theory, the latter of which was well received by All About Jazz critics Mark Corroto and David Adler . On this present recording, Berkman devotes the lion's share of his attention to his own compositions. That is with the exception of the disc closer, a folksy solo rumination on Woody Guthrie's "Mean Things Happening In This World," which provides a quiet brainy piece with which to tie up the previous complex and demanding excursions.

The opening two pieces, "Cells" and "Triceratops," are jazz ensemble exercises going in opposite directions. The former "Cells" is balladic in tempo and rhythm with a complex head (if that is what the opening can be called) that sublimes into the solo sections, which are barely tied to the delicate rhythm section. On the other hand, "Triceratops" is a blues that is not a blues. Had hard bop developed over the last year instead of during the 1950s, "Triceratops" is what it would sound like. The piece opens with a complex up-tempo head that leads into muscular solo presentations. Berkman's solo is peppered with hard bop blues conventions, as if his right hand were ruled by Horace Silver and his left had by Red Garland. While not performed in the traditional twelve-bar form, the solo playing leaves no doubt that this is all about the blues.

Berkman states that his composition "Iraq" was one of his few compositions trying to express the tangible, a political viewpoint. It has a decidedly Eastern flavor with Dick Oatts' freely played soprano saxophone. The rhythm section is very much a part of the picture with drummer Nasheet Wait's drumming providing the velocity to the harmonically complex "Penultimatum." Ugonna Okegwo?s bass provides the rhythmic adhesive of the group, while also providing informed and sensitive solos. Like Dave Douglas, David Berkman very well may represent where jazz is going, a direction of intelligent freedom lightly tethered to the immediate past.

Visit Palmetto Records and David Berkman on the web.