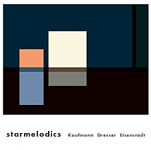 Canadian drummer and composer Harris Eisenstadt spans a broad spectrum. He has written for large ensemble, octets and small groups, in styles ranging from chamber to Senegalese pop. Though particularly enamored of African drum rhythms he also works readily in totally improvised settings, so his name on the sleeve rarely betokens an expected outcome.

On Starmelodics, the drummer in conjunction with German pianist Achim Kaufmann and bass virtuoso Mark Dresser takes a slightly sideways look at the modern piano trio, blending the written with free improvisation, with sometimes almost imperceptible joins. All three are equals in composition as much as the seat-of-pants interplay, each contributing two charts, alongside three collective improvs. With varied authorship comes subtle shifts in emphasis. To oversimplify, Kaufmann's pieces are the most cerebral, while Eisenstadt's verge on the jazzy, with Dresser somewhere in between.

After a mysterious opening collage of metallic timbres, Dresser's title track picks up momentum and edges towards a resolution which never quite materializes, for a nervy start to the 56-minute program. In the liners, Kaufmann describes the two independent lines scored in his "Qualtinger" as "controlled serendipity" and that same feel of ricocheting between congruence and dissonance emerges from much of this deliciously oblique offering. The pianist nuances his abstract lines by dampening the piano strings on his edgy pecking "Birdz," but elsewhere his ringing chords and measured droplets provide just the right foil for Dresser's thrumming twangs. Eisenstadt adroitly balances texture with pulse, especially on his exquisite "Seattle," imagined as a glorious place, bathed in warm autumnal colors. Dresser's astonishing arco introduction to the same piece confirms it as one of the albums' high points, with his harmonics, bent notes and strums evoking three simultaneous voices.