Tri-Fi: Staring into the Sun 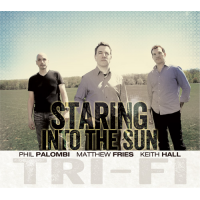 With their impressive new release, Staring into the Sun, Tri-Fi defies the odds and provides a sound argument that a piano trio can indeed be a "band" in the truest sense of the word. In most cases, albums that are released by musicians marketing themselves as a jazz "band" are merely vehicles to provide a framework for the individual musicians of the "band" to show off their musical prowess and bombard the listener with indulgent solo after indulgent solo. With its fifth album and follow-up to A Tri-Fi Christmas (self- released in 2011), Staring into the Sun firmly establishes this trio as a highly pleasurable and satisfying exception to this rule.

Tri-Fi consists of three seasoned musicians that have been creating music together for the past ten years: Matthew Fries on piano, Grammy Award winning Phil Palombi on bass, and Keith Hall on drums. All three musicians have earned fine reputations in their own right and are in highly demand in elite jazz circles. Originally brought together in 2003 as the rhythm section for singer Curtis Stigers, the members of Tri- Fi have made it a priority over the years to continue to collaborate and perform together. Staring into the Sun is a shining example of how a piano trio can indeed create and perform as a "band." There is an energetic unity and balance throughout the disc, as the musicians communicate musically as equals, allowing one another to shine as individuals while maintaining the integrity of the music as a cohesive and singular artistic expression.

The disc opens with "Open Water," and the listener is quickly drawn into a subtle, rhythmic swing, emphasizing a melodic exchange that is prevalent throughout the album. "Circle Dance" is a beautiful piece written by Fries, and he provides a reflective theme on piano. Palombi and Hall furnish intrigue as they subtly push the rhythmic boundaries of the song, and Hall adds a dazzling and expressive display of percussive bursts at the conclusion of the tune. The title track is a magical and impressionistic piece composed by Palombi, highlighting the intense chemistry between the musicians as they impressively improvise without losing the integrity of the song. "Josie Bebop" is a fun and energetic romp composed by Hall and dedicated to his daughter. The catchy "Airstream" builds around a melodious piano hook, as Palombi and Hall reinterpret the melody in their own right expressive fashion.

As the individual careers of Fries, Palombi and Hall continue to take off, their one hopes that they will continue to play together and create new material in the future of an equal caliber as Staring into the Sun.