By GLENN ASTARITA
January 1, 1998
Sign in to view read count 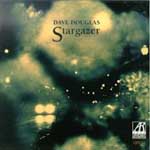 With Stargazer, Dave Douglas has quickly established himself as one of the premier trumpet masters of the 90's. His affiliation with John Zorn and the wild and witty band Dr. Nerve are prime examples of Douglas' recent achievements. His musicianship and approach is nothing less than mind-boggling. Douglas' chops, stylizations and creativity are once again evident on this tribute to the great Wayne Shorter.

The liner notes indicate that the music here is by and for Wayne Shorter. All the compositions are originals except for motivating and inspired renditions of Shorter classics "On the Milky Way Express," "Pug Nose" and "Diana." Douglas is clearly the band leader and enjoys highly energetic support from Uri Caine's piano, Josh Roseman's trombone, Chris Speed's sax, James Genus' bass and his fiery "Masada" band mate Joey Baron on the traps.

The arrangements are superb. This delicate and poignant approach to Shorter's compositional style is incredibly rewarding. Young Chris Speed hints and dabbles with Shorter phrasing, but ultimately stays within his own unique and expressive style on the tenor sax. Caine is everywhere and performs with creative spirit. The rhythm section rolls along like a high speed commuter train.

The Shorter compositions recreate scenes of intense beauty and are performed with Douglas' personal stamp of ingenuity. Douglas' leadership is evident, but the band is extremely tight, yet their sensitive touch is very imminent. Stargazer is not your run of the mill solo fest. The musicians take extreme care to capture the aura of Shorter's music within the scope and framework of all these compositions.

This release ranks among Douglas' most inspired work — fine craftsman with amazing chops yet an extremely versatile and musician. The future of jazz seems bright with the advent of Dave Douglas' vision. Highly recommended.