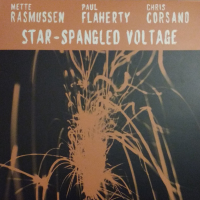 I prefer the moniker 'fire music' over the descriptor 'free jazz.' It does a better job illustrating what improvising musicians achieve when they venture into the driving rhythms and forward momentum of this music. Good free jazz sounds like a bonfire. Great free jazz sounds, and feels like a barely contained wildfire. This first meeting between saxophonists Paul Flaherty and Mette Rasmussen can be classified as a conflagration with drummer Chris Corsano as the accelerant.

Corsano brought together these two firebrand saxophonists, both of which, he has separately collaborated with. Flaherty and Corsano's have made The Hated Music (great term) since 1998 in duo and with the likes of Wally Shoup and Thurston Moore. Corsano's interaction with Rasmussen is much more recent. Their duo All The Ghosts At Once (Relative Pitch Recordings, 2015) drew the attention of many new listeners. Although the connections between Albert Ayler/Milford Graves might be made here, these two younger players were influenced just as much by rock music, noise, and minimalism as their elder Flaherty who converted to fire music from jazz. Corsano is just as comfortable playing with Björk as he is with Joe McPhee.

What is evident from the ignition is that all three, Corsano and Rasmussen from the 1980s and Flaherty the 60s, have arrived at the same destination (out). "Salvaged" opens the LP with two saxophones wrapping themselves around each other before Corsano's drums enter with his driving force, built upon energy over swing. Even when he drops out, the tempo remains in the wake of his silence.

Flaherty and Rasmussen are in duo on "In The Light Of things" a probing, dare we say throwback piece that wouldn't be out of place in Julius Hemphill/David Murray duet from the World Saxophone Quartet days. Corsano and Rasmussen pair-off with some extended technique on "Salt." Bow on metal and vibrating prepared saxophone exploit the metal pieces and parts of their instruments. The longest piece, "Reckonings" (at 15 minutes) exercises some scary demons. Upper register saxophone and Ayler-calls mix with Corsano's incendiary pulse before the piece resolves itself with the drummer's cymbal accents and hand drumming over the smoldering sound of exhausted horns.