If you’re feeling blue, you need Stanley Turrentine, and Blue Hour is exactly the right prescription. 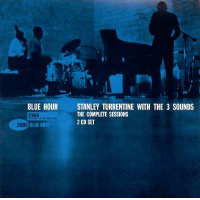 But if you're feeling blue, you need Stanley Turrentine, and Blue Hour is exactly the right prescription.

Stanley Turrentine is the very definition of jazzy blues, in almost any setting, with almost any backing band. His soulful sax features heavily on two of my all-time favorite jazz-blues albums: 1960's Midnight Special with organist Jimmy Smith and guitarist Kenny Burrell, and 1963's Midnight Blue with, again, Burrell.

Blue Hour, a 1960 session with The 3 Sounds piano trio, is cut from the same cloth. This is straight-up blues, more blues and nothing but the blues—sad and slow and absolutely searing.

As the title implies, Blue Hour is one of those perfect late-night records, whether contemplating your deepest sadness or settling in for the night with a lover. It's the kind of record that most non-jazz fans think of when they think of a smoky, soul-drenched saxophone.

The original record has just five cuts, though each runs between 5 and 10 minutes. Four of the five tunes are slow, relaxed and sensual. Turrentine, of course, is the star, but pianist Gene Harris is also spot-on, turning in great, emotional, original solos. It's hard to single out any one cut, though the opening ballad, "I Want a Little Girl," and the blues classic "Willow Weep for Me" are highlights.

The only non-ballad tune is a Gene Harris original, "Blue Riff"—a bouncy blues that effectively cuts the mood and sets your toes tapping, before the record returns to slow and dreamy.

The original album is a perfect little nugget, but there is also an expanded edition. Blue Hour: The Complete Sessions is a 2-CD set that adds eight new tracks. They're fine songs, but they actually detract from the mood, which is probably why the new cuts are on a CD of their own.

Stick with the original.