When bassist Stanley Clarke gathered drummer Lenny White and piano phenom Hiromi together last December to do his first-ever trio album, Jazz In The Garden (Telarc, 2009), no one knew quite what to expect.

Hiromi was clearly a new kid on the block, at least in this straight-ahead context. Clarke and White were both veterans who had been playing these notes since before she was born.

The question was whether a fusionista like Hiromi could be brought successfully into a musical world that would be measuring her not simply by her ability to flash a fancy solo, but by her ability to speak the language of an idiom. Testing her mettle with such high profile players was risking a lot.

After the show at Catalina's nearly a year later, she addressed the comment that she had come out punching with a surprisingly intense, aggressive energy on the very first number of the set. Penned by Clarke for his trio CD, "Three Wrong Notes" is an infectiously melodious bop tune that requires the players to find a groove and get it swinging fast, right from the opening notes—and Hiromi had showed she could really bring it. A Thelonious Monk-like time signature at the break surrounded on all sides by Dave Brubeck-ian bounce. Responding to the comment on her energy level, she smiled and said: "I had to, just to keep up with these two." 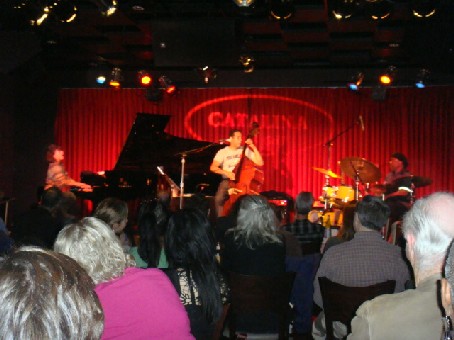 That's the truth. But while she may have a ways to go before she catches up with "these two," she's catching up pretty damned fast.

In fact, she came out hitting so hard on "Three Wrong Notes," that at times Clarke and White were keeping up with her. And the capacity crowd at Catalina's went nuts for it. Obviously, the majority had come to see the legendary bassist and drummer, but the brilliant young Japanese prodigy was stealing their thunder with her rambunctious blues figures and glistening arpeggios.

Playing with a ferocity usually reserved for later in a performance, if not an overheated encore, Hiromi tore into her solos with such passion that she immediately engaged the crowd and fired up Clarke, whose own solo went places the studio recording never would have predicted. Near the end of the tune, White traded a few fours with her, snappy little snare patterns and rolls that kept it jumping. All three were smiling by the end. It was a perfect tune to open the set.

The next number, also from Clarke's CD, was "Sakura, Sakura," a piece which is easily Japan's best known folk music in the West. Too well known, perhaps, because pretty as the melody is, by dint of being included on the soundtrack of nearly every Western film ever made about Japanese culture, this low-energy ditty about blossoming cherry trees has become a tiresome cliché. They were able to pull it off, somehow, Clarke's arrangement and the clash of Hiromi's angular, energetically urban-sounding improvisation rescuing it from toxic sweetness.

Just as familiar to the audience was a composition borrowed from the set list for Clarke's and White's current world tour with Chick Corea. "No Mystery," which both have played (and Hiromi has undoubtedly heard) hundreds of times, took off like a shot from the opening unison phrases. In this case, familiarity has bred perfection, not contempt. When the inevitable live CD is released, the first track to hear will be this one.

As she took up the melody, her soaring solo lines broke it out into new and strangely beautiful territory. Late in the tune, as a run-up to the composition's breathtaking coda, Stanley indulged his new fascination with hand drumming on the body and neck of his big upright in an explosive, hammering display that no one who saw and heard will ever forget. Corea will undoubtedly grin widely when he hears it.

After only a few bars of Joe Henderson's "Black Narcissus," it was plain that Hiromi was not only keeping up with "these two," she was stealing the show.

Not that Clarke and White were trying to stop her.

The piano-bass-drums trio configuration by its nature results in a timbral spectrum. The high frequency sounds, naturally, are more audible than the lower frequencies and jump out at the listener. But even if the arrangements gave Clarke plenty of opportunities to play higher on the strings, and White used a lot of snare and cymbal, the trio's orchestrational design usually put the solo spotlight on the piano whenever a main theme or melody needed to be stated. It's by design.

Stanley Clarke's soloing abilities have been unquestioned for 30-some years. Shortly after he first gained worldwide recognition playing with the early edition of Return to Forever, he set the gold standard for every electric bassist in the world with solo recordings like "Silly Putty" and "School Days."

So when he pulled out his bow and caressed those fat strings to begin the next number, it was not to tease, but to please the audience. The tune—unnamed, and described with only a short commentary from Clarke at the song's conclusion, when he smiled broadly at Hiromi and said "crazy!"—turned into a pleasantly frenzied free-for-all jam that finally built to a duel between them. The Cheshire grin on Hiromi's face was evidence of who had fired the winning shot.

Lenny White is the kind of timekeeper only an attentive listener notices. Put another way, he's noticed when he wants to be noticed. His efficient mastery is what gets the train to run on time, and makes sure the locomotive pulls into the station. At any point when the composition calls for percussive energy, whether in support or leading the charge, White supplies the necessary rhythmic thrust. At the end of the intro to "Paradigm Shift (Election Day 2008)," he did both by opening with a crackling rim shot.

Politics aside, when a black man was elected president of the United States last Nov. 4th, racism was officially rescinded as a national policy. This is a piece of music which calls for the dramatic, and delivers. White, who seldom takes an extended solo (he has certainly avoided showy or gratuitous displays in his career) took a solo that was mesmerizing. Not the machine-gun barrage of notes that often passes for a performance, but a musical interlude that was as notable for what it didn't do as what it did. Reminiscent somewhat of Max Roach on an introspective evening, he played different parts of the kit in an organically developed melody, with the rhythmic qualities of echoing counterpoint, like water condensing and splashing inside an underground cave.

When the musicians returned for their encore, they did yet another tune from Clarke's trio CD, the Red Hot Chili Peppers' crooner's ballad "Under the Bridge," a big radio hit that had always seemed like a case of mistaken identity. His arrangement is a curious one, not a deconstruction at all, but a re-interpretation. The familiar piano intro is kept intact while he plays a faithful rendition of the vocal melody line on a bass he said later is a "Victor Bailey Acoustic/Electric Bass," a fretted, sweet-toned Fender guitar that looks like an over-sized version of what Gene Autry used to strum on horseback, but which he was able to pop and pluck vigorously. In Clarke's hands the tune is stripped clean of the ironically lilting but morose pathos of the original's lyrics, turned inside out and transformed from a junkie's lament into a swinging, upbeat song of redemption. Here, the City of Angels becomes, for a moment, that glittering, mythic sanctuary called Hollywood where a lost soul can find succor for his artistic dreams.

Passionately playing his axe this night like a lead guitarist, Clarke burned. Which of course prompted Hiromi to tear apart the piano line. The abstracted chords she pounded out on the big Yamaha grand were jarring, sometimes harshly voiced, as she utilized all 88 keys to embrace a wide spectrum of emotional contradictions, going further and further outside the boundaries of the composition, skirting dissonance and disaster, but always returning safely and staying just this side of chaos.

And then White brought the train into the station. Clouds of steam plumed as the brakes hissed and coughed, and the tracks trembled. One by one the three of them stood up, walked forward to stand on the platform and take a bow.

Later, backstage, Hiromi came up to White to say good night and ask if they had recorded the show, and White told her yes, the first set. She had clearly preferred the second, the one just concluded, but there would be other shows. After he and Clarke complimented her on her playing, White rearranged himself on his corner of the couch and returned to the conversation he had been having. Leaning forward, he tried to respond to his friend's comment about what Miles Davis had supposedly once said about jazz, that "sometimes mistakes are the baddest shit that happens." "Music," White said in correcting him, "is how you get out of your mistakes. It's how you get from the point where you're lost... finding your way back from that lost point."