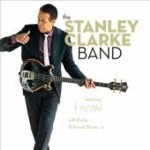 Stanley Clarke is still playing the bass the way he wants to, still pulling sounds out of his assortment of electric, acoustic and Alembic basses like nobody else, and still slapping, plucking and thumbing his way through contemporary, fusion jazz, rock, funk and whatever else he puts his mind to.

Clarke honed his craft working with pianist Horace Silver, saxophonists Gato Barbieri and Pharoah Sanders and drummer Art Blakey among others before keyboard player Chick Corea grabbed him for Return to Forever. Clarke enjoys returning the favor to young talent and he's got plenty to work with here in drummer Ronald Bruner, Jr., keyboardist Ruslan Sirota and—making a return engagement from The Stanley Clarke Trio—Hiromi Uehara on piano. The third member of the trio, Lenny White, is present as well, but trades in his drum seat for the producer's chair.

There are no radical departures on The Stanley Clarke Band as Clarke seems to be taking a victory lap here, revisiting past triumphs. As he has branched out to scoring films and television, Clarke can do pretty much whatever he wants to as a session musician, producer and bandleader. He seems to have left behind his flirtations with tepid rock 'n' roll (such as Rocks, Pebbles and Sand, Epic, 1980) and the lifeless pop of an earlier version of The Stanley Clarke Band, (Find Out!, Epic, 1985).

When you do as many things as well as Clarke, the trick is to find material challenging enough to stretch him and his bandmates. The bassist has both here even if he has to rummage through his back catalog a bit. "No Mystery" revisits his days as the bass master in Return to Forever. The proficiency of Hiromi's acoustic piano and Sirota's synthesizer isn't quite on the same par as Corea, but they're no slouches and Clarke's playing is still as energetic as it was in the mid 1970s when RTF was blowing both minds and speakers.

That's not to diminish the new stuff at all, as Sirota's "Soldier" features some dynamic interplay between the Israel-born keyboardist and Clarke. Armand Sabal-Lecco's "Fulani" is old school fusion for the 21st century. Hiromi's "Labyrinth" is as dense and moody as its title and the sizzling "Sonny Rollins" is an all-out rave with Bob Sheppard's tenor sax, Cheryl Bentyne's soaring vocals and a big, brassy horn section joining in the fun.

Clarke, in all his improvisations and incarnations as an artist, has never distanced himself from his jazz-rock roots. "Larry Has Traveled 11 Miles and Waited a Liftime for the Return of Vishnu's Report," despite its clumsy title, is a well-intentioned homage to the genre's giants including drummer Tony Williams' Lifetime, Weather Report, trumpeter Miles Davis and Mahavishnu Orchestra among others.

There's a sense of closure from The Stanley Clarke Band and it's quite deliberate. Clarke says he's done with making electric albums for a while. Aged 59, Clarke has considerable and deserved pride in what he's accomplished as a composer and musician and whatever direction his future endeavors take him in, his legacy is already secured. He is to the electric bass what Jimi Hendrix was to the electric guitar; an unparalleled virtuoso who sets the standard for others to follow even as they create their own legacies.


Tracks: Soldier; Fulani; Here's Why Tears Dry; I Wanna Play For You Too; Bass Folk Song No. 10; No Mystery: How Is the Weather Up There; Larry Has Traveled 11 Miles and Waited a Lifetime for the Return of Vishnu's Report; Labyrinth; Sonny Rollins; Bass Folk Song No. 6 (Mo Anam Cara).