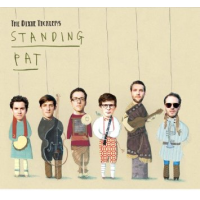 The revival of traditional jazz in Britain in the 1950s began in a blaze of idealism. In the following decade, it degenerated into an undignified scramble for commercial success.

The Dixie Ticklers, a London-based sextet, want nothing to do with Trad. Their principal influences might be Louis Armstrong's Hot Five, Jelly Roll Morton and Bix Beiderbecke, but a whole lot of other things have gone into their music. They've been influenced by the Crescent City's many rhythm 'n' blues and funk bands and have even—whisper who dares—copped a few modern jazz licks.

Leader Dom James says: "British trad is not something that grabs me. The New Orleans sound and line-up got merged with a fairly pedestrian 4/4 swing and lost its character, groove and unpredictability."

The Ticklers' debut album quickly establishes the band's credentials. It takes its title from a line in "Saint James Infirmary Blues" and kicks off with the number that was the first-ever recording by the Armstrong Hot Five, "My Heart," from 1925.

James contributes some excellent bluesy clarinet to the Latin-tinged "Monkey Puzzle" but it's not until a second Hot Five number, "Wild Man Blues," that the band really takes off, with fine punchy trumpet from William Rixon.

The Ticklers are less at home with Duke Ellington's "Purple Gazelle,"also known as "Angelica," which was first recorded on the historic 1962 album for Impulse, Duke Ellington & John Coltrane.

There are two originals, "Boujis" and "Our Friends," a chant—lively and life-affirming—which is not listed on the sleeve.

Standing Pat is intelligent but without pretension. It's also a whole lot of fun, of which there is far too little on today's jazz scene.

About The Dixie Ticklers