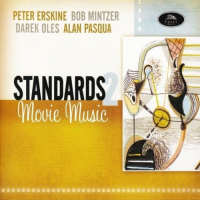 Standards hold a particular fascination for drummer Peter Erskine, as initiated through his Grammy-nominated Standards(Fuzzy Music, 2008). Unlike that first album—comprised primarily of old jazz standards—Standards 2, Movie Music focuses on songs that are considered standards from the realm of Hollywood movies. Featuring music from Gone With The Wind (1939), considered by many to be one of the best movies ever made, to the main theme from Rosemary's Baby (1968), this unusual collection of songs, by necessity, has to leave out choices from a wide enough range of popular movies to fill several volumes—a risk Erskine readily acknowledges in his liner notes.

Erskine is joined once again by pianist Alan Pasqua, but the rest of the personnel for this sequel differs from the first album, with bassist Darek Oles replacing the late Dave Carpenter, and the inclusion of saxophonist Bob Mintzer, who changes the group's dynamics with his pronounced play in the lead role throughout. From 1961's West Side Story, "Somewhere" takes a different turn, with light moments from Pasqua and Mintzer, while Erskine adds strong cymbal accents.

Cole Porter's "Night And Day," from 1934's The Gay Divorcee, is a highlight of the album, featuring Mintzer, who also provides its striking arrangement. Oles introduces the main theme from Rosemary's Baby, a slow-moving number with a teasing melody, much like the original film, which kept audiences on edge till the end. Two other magical pieces on the album are "Cinema Paradiso," and Mintzer's arrangement of "I Concentrate On You."

A nine-minute rendition of "For All We Know," a jazz standard largely unaffiliated with any film, closes the album. Once again, Mintzer leads the music with beautiful phrases backed up by Erskine's smooth touch on the brushes and Pasqua's soft piano lines. Though issued as a follow-up, Standards 2, Movie Music, begs for its own sequel, considering the number of movie tunes available to work with, and the caliber of the quartet Erskine has chosen.