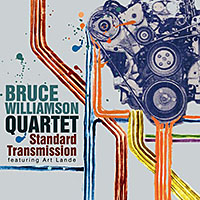 One of the early genius elements of small ensemble jazz manifested November 26, 1945, when Charlie Parker entered the studio with Miles Davis and Dizzy Gillespie, and, using the harmonic foundation of Ray Noble's "Cherokee," recorded a new melody, call "Ko-Ko." He went on to do the same with the Hamilton/Lewis composition "How High The Moon," which became "Ornithology," and Fats Waller's "Honeysuckle Rose," which became "Scrapple from the Apple." Later, clever interpreters would make arrangements of the original and the jazz-influenced melodies played over one another, as Bach would have done had he smoked a spliff and went "Thriving from a Riff."

In a similar spirit, saxophonist Bruce Williamson creates a mash-up of Thelonious Monk's "Misterioso" with the aforementioned "How High The Moon" on "Mysterious Moon." Separately, the two pieces seem to have little in common. However, with Williamson on alto saxophone playing "How High The Moon," while pianist Art Lande performs the familiar Monk valedictory, the melodies come together—not perfectly, but in an intriguing enough way to be considered inventive. Here the counterpoint turns from Bach and spliff to Scarlatti and mushrooms.