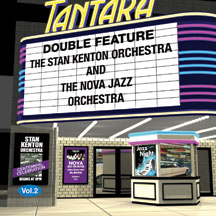 One of the more difficult aspects of reviewing Tantara's series of impressive salutes to Stan Kenton and his music is knowing where to begin. As on Volume 1 of the label's Double Feature (with Volume 3 already on the street as this is being written), the two-CD set is divided in twain: Disc 1 features the Kenton Orchestra in two live performances from 1959, Disc 2 fourteen seldom-heard Kenton charts by Bill Mathieu (who also wrote the earnest and informative liner notes), performed by the superb Nova Jazz Orchestra from St. Paul, MN (the equally commendable DePaul University Jazz Ensemble was ensconced opposite the Kenton Orchestra on Volume 1). While anyone who knows and loves Kenton's music will be well-versed on what to expect from Disc 1, the real eye-opener (as was true of the DePaul ensemble on Volume 1) is the Nova Orchestra on Disc 2, whose re-creation of the "Kenton sound" is masterful and on the mark.

In addition to furnishing all of the arrangements on Disc 2 and composing five of its numbers, Mathieu, who began writing for Kenton in 1959, arranged "What Is This Thing Called Love," "This Is Always" and "Willow Weep for Me" on Disc 1, which consists of a radio air-check in April 1959 from the Blue Note in Chicago and an appearance in June at the Red Hill Inn in Pennsauken, NJ. As most of the music on Disc 1 is familiar (including "The Big Chase," "My Old Flame," "Get Out of Town" and "I Concentrate on You" from the album Back to Balboa), it can be summarized rather quickly. Suffice to say the '59 band swung about as hard as any Kenton ever fronted, with well-knit charts by Mathieu, Pete Rugolo, Johnny Richards, Marty Paich, Bill Holman, Lennie Niehaus, Gene Roland, Joe Coccia and the leader himself. On the Blue Note date, whose sound is not sub-par but variable, the orchestra leads off with one of Holman's finest charts, "What's New" (solos by Niehaus, baritone Billy Root, trumpeter Rolf Ericson and trombonist Kent Larsen).

The same quartet solos on "I Concentrate on You," while elsewhere there are effective statements from tenor Bill Trujillo and trombonist Archie LeCoque. The Red Hill Inn concert, splendidly recorded by Wally Heider, offers more of the same, with baritone Jack Nimitz, in for Root, soloing with Ericson, tenor John Bonnie, trombonist Jimmy Knepper and percussionist Mike Pacheco on Paich's "The Big Chase." Trombones and rhythm are out front on Rugolo's "Interlude," and bass trombonist Bobby Knight is featured on Richards' arrangement of Cole Porter's "Get Out of Town." Also on the menu are Matt Dennis' "The Night We Called It a Day," Ralph Burns' "Early Autumn," the standard "This Is Always," Duke Ellington's "Don't Get Around Much Anymore" and Roland's "Twilight Riff."

Disc 2 opens with a pair of charts written by Mathieu in 1958 as "audition pieces" that were never performed by the Kenton Orchestra. Nor were the dozen arrangements that follow, heard here for the first time as performed by the Nova Jazz Orchestra, ably led by baritone saxophonist Mike Krikava. Whatever reason Kenton had for turning them down, it certainly wasn't owing to a lack of quality but perhaps more a matter of personal taste or musical direction. Kenton knew the temperament and sound he wanted, and not every new arrangement made it into the book. A number of Mathieu's charts did, and he was the sole arranger on one of Kenton's most widely praised albums, Standards in Silhouette. Here, Mathieu's five original compositions are admirably played by the Nova ensemble along with his tasteful versions of nine standards.

There is one guest soloist, long-time Twin Cities stalwart Dave Karr, who sparkles on tenor ("Raff Riff," "A Foggy Day") and baritone sax ("Indian Summer"). Nova has some engaging soloists of its own, namely trumpeters Sten Johnson and John Ahern (enchanting on his feature, "Easy Living"), alto Bob Byers, trombonists Mike Haynes, Mike Larson and Chris Wiley (showcased on "Come Rain or Come Shine," "Magic Lantern" and "I Loves You Porgy," respectively), tenor Paul Peterson and baritone Bill Burton. The rhythm section, bolstered on the Latin numbers ("The Breeze and I," "Frenesi") by Angel Diaz on timbales and congas, is sharp and steady. Disc 2 closes with one of Mathieu's most charming (unrecorded) compositions, the free-wheeling, Mulliganesque "Blues News" (solos by Peterson, Byers and Johnson).

Two volumes to date, and two unequivocal winners for Bill Lichtenauer's Tantara Productions. As is true of baseball and blue skies, you can never have too much Stan Kenton, especially when the themes have never before been recorded. Volume 3 in the series should be another humdinger, as it encompasses more of Kenton's previously unrecorded music (this time from the 1970s) and a performance on Disc 2 by the formidable University of Wisconsin-Eau Claire Jazz Ensemble. If it's anywhere near as exciting as Volumes 1 and 2 it should be a must-have in every big-band library. 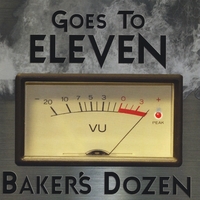 Baker's Dozen is of course a play on words, sort of like Danny Ocean and his associates in the film Ocean's Eleven. The "baker" here is leader and baritone saxophonist Paul Baker, and what he and his Austin, TX-based "dozen" have cooked up is an album that teems with music that is open-hearted and sunny, the kind that places a smile on your face and keeps it there. The arrangements, all by Baker (who also wrote every song on the studio date save Robert Skiles' New Orleans-styled "Another Zydobeto"), are reminiscent of the buoyant and hard-swinging charts written for Maynard Ferguson's comparably-sized ensemble in mid-60s by Willie Maiden, Don Sebesky, Mike Abene, Slide Hampton, Don Menza and other masters of the genre.

Owing to the varying schedules of the musicians involved, Goes to Eleven was recorded during a four-month period in 2010 and there are some personnel changes, notably in the trumpet section and among the basses (three are listed). Baker managed to keep the trombone and reed sections intact, while pianist Morris Nelms and drummer Rob Kazenel report for duty on every number. What's important is that no matter who is on board, everyone plays admirably. These surely must be among the finest jazz musicians the Austin area has to offer. The ensemble is tight, the soloists consistently sharp and engaging. Baker solos twice (on "BJam Blues" and "The Woozy Dude Blues") and there are emphatic statements along the way by almost everyone else. They are enriched at every turn by Baker's burnished charts, which swing easily along without ambiguity or surfeit.

There is, however, ample variety, from the straight-ahead swagger of "Goes to Eleven," "Woozy Dude Blues" and "Spazz Jazz" to the balladry of "The Chanteuse" and "Sing," the Latin stylings of "Todo Que Eres" and "El Viento Caliente" and the harmonic sensibility of "BJam Blues," "Pellalarigram," "Full Circle" and "Chick Digs It." Whatever the mood or tempo, Baker's Dozen is on top of its game, producing a session that pleases from start to finish. The rhythm section, firmly anchored by Kazenel, governs with agility and power, as does lead trumpeter Eric Johnson. When all is said and done, Baker's Dozen really cooks, and the nourishment it provides is both succulent and satisfying.

Danny D'Imperio and the Bloviators

Even though thirteen musicians are listed, Alcohol isn't really a "big-band album," as only on three tracks (Joe Farrell's "Ultimate Rejection," Takes 1 and 2, and Charlie Parker's "Blue Bird") do more than ten members of drummer Danny DImperio's Bloviators (look it up) take part. Elsewhere, the group's size varies from sextet ("Portrait of Stephanie," "It's Magic") to octet ("Room 608," "Make It Good"), nonet ("The Song Is You," "Blue on Blue") and tentet (Melvin Rhyne's "It's Love"). All of the tracks save one ("Stephanie," from 1991) were recorded in October 1998. For the most part, this is a beefed-up version of D'Imperio's smaller groups that have recorded at least half a dozen splendid albums for V.S.O.P., with many of the sidemen from those sessions present and accounted for on this one.

Having said that, it should be noted that the music is first-class all the way. D'Imperio's choice of material is exemplary, and the bop-flavored themes go down as easily as whatever sauce the band was imbibing. Truth be told, there's no way of knowing what role, if any, alcohol played in fashioning the album, but if these gentlemen were indeed lathered as the sessions were being taped, other groups should take note and order a round or two of whatever it was they were having. Drunk or sober, D'Imperio and his colleagues are invariably sharp and enterprising, and you won't hear straight-ahead jazz performed much better than this.

Solos for the most part are left in the capable hands of trumpeters Greg Gisbert and Andy Gravish, alto Gary Pribek, tenor Ralph Lalama, trombonist John Mosca and pianist Hod O'Brien, each of whom responds impressively whenever called upon. Pribek, a Parker disciple who is one of D'Imperio's particular favorites, is showcased on an easygoing version of Sammy Cahn / Jule Styne's "It's Magic." Guitarist Steve Brown adds another voice (and solos as well) on "It's Love" and "Blue Bird." Trombonist Early Anderson, who appears only on the two renditions of "Ultimate Rejection," is, according to D'Imperio, "presumed deceased," but a web search found him alive and busy at the Westwood Music Studios in New Jersey.

The rhythm section, with D'Imperio and O'Brien leading the way, is always alert and in control. As for the bassist, he remains a mystery, as there's no way of knowing whether "Queeg" is an assumed name for Dave Shapiro or other bassists who have worked with the group. D'Imperio, who is seldom sober (pun intended) and may have written the liner notes with tongue in cheek, says Queeg is "a troglodyte [well, he spells it "trogolidyte"] who, in December 2010, was found frozen solid in his hovel in West Townshend, Vermont." The truth may never be known. What is undeniably true is that Bloviators and Alcohol do mix, and that D'Imperio and his mates have produced a superlative album that sparkles from end to end.

Missouri's long and storied jazz history, which had its origins in Kansas City almost a hundred years ago, continues today with a fairly active jazz scene in that city as well as in a number of institutions of higher learning including the University of Missouri at Columbia, whose latest recording, Tunnel Vision, is described on its cover as "a collection of new music." That it certainly is, encompassing eleven fresh compositions, five of which were written by UM students, two more by the Concert Band's director, Dr. Arthur White, and one each by guest artists Bobby Watson, who leads the Jazz Studies department at the University of Missouri-Kansas City Conservatory of Music and Dance, and UM alum and Kansas City stalwart Mike Metheny.