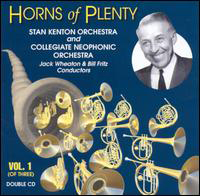 It's not often that I devote an entire column to a new big-band release, but Horns of Plenty, a superlative six-disc set from Tantara Records, is the exception that proves the rule. And what a storehouse of riches it is, with three of the discs devoted to selections, some previously unissued, by Stan Kenton's groundbreaking Mellophonium Orchestra circa 1961-62, the others to performances by top-of-the-line Kenton-inspired collegiate ensembles, two from the U.S.(in performances marred only by second-rate sound) and one from overseas. The question is, how should one best appraise such an anthology, academically or musically? Either approach has merit, but as I am certainly no scholar, of Kenton or anyone else, I've chosen the latter path.

Let's start with a brief overview of what is included. Discs 1, 3 and 5 are comprised (with one exception) of live performances by the Kenton Orchestra in Cincinnati, OH; Santa Barbara, CA, and Long Island, NY, the first taped by Wes Morland, the others by legendary recording engineer Wally Heider. The exception is track 1 on disc 1, a cautious reading of Marty Paich's arrangement of "My Old Flame" that was taped during a rehearsal on March 15, '61, in Hollywood. Among the forty selections by Kenton are eight charts previously unissued by any of his orchestras and four others never released in the mellophonium format.

Disc 2 is a studio recording made in June 1970 by the Collegiate Neophonic Orchestra, an ensemble that had Stan's blessing and support (it was he who arranged the session as a fund-raiser for the group). Disc 4, transferred to CD from two archaic reel-to-reel tapes, summarizes a concert performance by the University of North Texas One O'Clock Band conducted by Stan himself on April 27, 1965, while disc 6 is devoted in large measure to a studio recording of Johnny Richards' dynamic Cuban Fire suite by Bobby Lamb's Kenton-influenced Trinity College Big Band from merrie olde England.

Although three songs are repeated during the Kenton concerts, two of them — "I Remember You" and "Stompin' at the Savoy" — are clothed in different arrangements, "I Remember You" by Wayne Dunstan (disc 1) and Bill Holman (disc 3), "Stompin' at the Savoy" by Gene Roland (disc 1) and in Holman's classic chart (disc 3). Holman's sizzling arrangement of "Malaguena" closes discs 3 and 5. Tantara's Bill Lichtenauer writes in the liner notes to discs 1-2 that because of inclement weather that limited the audience during the orchestra's concerts at the Moonlight Gardens in Cincinnati, "there is a good chance that Stan treated the gig as an opportunity to conduct an open rehearsal." The band was sight-reading some new material, he adds, and Dunstan's arrangement of "I Remember You" proved especially troubling. "Stan was a perfectionist and very protective of his music," Lichtenauer observes, "so there is no way he would have wanted this piece to be released due to the sub-par delivery."

True, this isn't vintage Kenton by any means, but even "sub-par" Kenton is well worth hearing. What is more conspicuous here and elsewhere is the erratic sound, which one might reasonably expect from forty-year-old concert tapes. Morland and Heider were good but they weren't Superman, and the clarity and balance throughout the three performances varies widely and isn't always near the mark. On the other hand, the music is first-class, and there are a number of piquant solos by saxophonists Sam Donahue, Gabe Baltazar and Marvin Holladay, trumpeter Marvin Stamm, trombonist Bob Fitzpatrick, Roland on mellophonium and Kenton at the piano. The mellophoniums add color but rarely lead the charge, except on Holman's fiery arrangement of "Tico Tico." There, as elsewhere, the listener is treated to vintage Kenton, powerful and brassy, a treasure by any measure.

The Collegiate Neophonic Orchestra pursues an adventurous course on disc 2, performing eleven forward-leaning originals including one each by Willie Maiden ("Bygones"), Pete Rugolo ("Conflict") and Gene Roland ("Dreaming Star," featuring guest trumpeter Bud Brisbois). The studio recording was conducted by co-leaders Bill Fritz ("Bygones," his own "Toccata") and Jack Wheaton who also composed "Phrygia." The music is clever and charming, from James Hill's spirited "Tribute to a Poltergeist" to Dave Grusin's brooding "Crescendo and Diminuendo for Quintet and Neophonic Orchestra." Again, however, the sound is not as clean as one would desire, with unwelcome distortions lessening the over-all pleasure on most selections, and especially the last two.

Even with Stan conducting the UNT orchestra, disc 4 is, to me, the least persuasive of the six on offer, owing largely to its mediocre sound quality (track 4 in particular is subverted by egregious sonic disruptions) but also because the program itself — with the exception of Bob Florence's "Here and Now" and Marty Paich's "Neophonic Impressions" — isn't especially engaging. The orchestra gives it the college try but is repeatedly sabotaged by aural inadequacies that make it difficult to gauge the performance with any degree of accuracy. Although the ensemble includes such capable players as trumpeters Galen Jeter and Don Owens, saxophonists Lou Marini and Billy Harper, pianist Dan Haerle and drummer Ed Soph, their best efforts are for the most part derailed by the disc's subpar acoustics (but the percussionists do earn high marks for their outstanding work on Van Alexander's "Three B's for Percussion").

Disc 6, on the other hand, is wonderfully recorded and an absolute pleasure to hear and appreciate (again). The Trinity Big Band's exhilarating version of the picturesque Cuban Fire suite was recorded several years ago and released as the aptly named album Cuban Fire. The band is at the top of its game on the suite and half a dozen bonus tracks gleaned from the album Salute to Stan Kenton, which was recorded in 1993.

The enterprise is greatly enhanced by the presence of three of Great Britain's leading Jazz artists — alto saxophonist Peter King, trumpeter Gerard Presencer and trombonist Mark Nightingale — two of whom perform not only on the suite but the bonus tracks as well (Presencer is replaced there by trumpeter Kenny Wheeler). While their solos on Cuban Fire are invariably crisp and powerful, the ensemble keeps pace with hyper-keen blowing on every track in a performance that surely would have pleased both Stan and composer Richards. The well-chosen bonus tracks include "Eager Beaver," "Body and Soul," Paich's sublime arrangement of "My Old Flame" and Stan's familiar theme, "Artistry in Rhythm."

While it goes without saying that Horns of Plenty is a must-have for Kenton collectors, big-band enthusiasts of all stripes should be pleased to know that there is much on this four-cornered compilation for them to admire and applaud, especially the Kenton discs (1, 3, 5) and the marvelous performance by the Trinity Big Band on disc 6.

Tracks: Disc 1 — My Old Flame; Between the Devil and the Deep Blue Sea; Polka Dots and Moonbeams; Spring Is Here; Body and Soul; Walking Shoes; Take Me in Your Arms; My Romance; Limehouse Blues; I Remember You; Stan Introduces the Orchestra; Stompin' at the Savoy; Darn That Dream; My One and Only Love; Lullaby of Birdland (66:01). Disc 2 — Tribute to a Poltergeist; Phrygia; Marche; Three Sounds for Neophonic Orchestra; Bygones; Lamentations; Neophonic Portrait; Toccata; Conflict; Dreaming Star; Crescendo and Diminuendo for Quintet and Neophonic Orchestra (73:03). Disc 3 — But Beautiful; Love Walked In; The Night We Called It a Day; I've Got You Under My Skin; You Took Advantage of Me; Tico Tico; Time After Time; I Remember You; Gigi; Stompin' at the Savoy; Caress the Sea; Yesterdays; Four of a Kind; I'm Glad There Is You; Malaguena (57:02). Disc 4 — Fanfare for the New; Prelude and Fugue; Here and Now (Sonata Allegro / Slow Song / Jazz Waltz Fugue); Music for an Unwritten Play; Passacaglia and Fugue; Neophonic Impressions; Stan Kenton's comments; The Three B's for Percussion (65:37). Disc 5 — Maria; The Blues Story; Artistry in Rhythm; Waltz of the Prophets; All the Things You Are; Intermission Riff; Stairway to the Stars; Mellophobia; Somewhere; Malaguena (47:11). Disc 6 — Cuban Fire Suite (Fuego Cubano / El Congo Valiente / Recuerdos / Quien Sabe / La Guera Baila / La Suerte de los Tontos / Tres Corazones); Eager Beaver; Body and Soul; Stone Canyon; My Old Flame; Valentine Blue; Artistry in Rhythm (77:19).