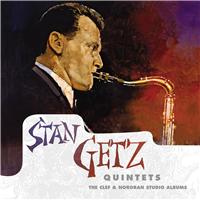 A pleasure to handle and a thrill to play, this limited edition box set brings together all the quintet studio recordings made by tenor saxophonist Stan Getz for impresario Norman Granz's Clef and Norgran labels, soon to be rolled together as Verve, between December 1952 and January 1955. The three discs capture Getz's emergence as a small group bandleader newly at the top of his game, and Granz's move from 78rpm singles to 10-inch LPs. The two events coalesced with productive synchronicity.

As Getz's star quality as a soloist grew, the longer playing times permitted by the LP format allowed that quality to shine at its brightest, along with the contrapuntal improvisations Getz engaged in with his frontline partners—first, guitarist Jimmy Raney, and then, from April 1953, valve trombonist Bob Brookmeyer (the de facto arranger when a member of the group). These two relationships became, after the sublime sound of Getz's tenor itself, the signature motif of the quintet. The Getz/Brookmeyer group reached its apotheosis on three 10-inch LPs—Interpretations, Interpretations #2 and Interpretations #3—which have long been only sporadically available, but are here included in their entirety.

The Getz/Brookmeyer partnership bubbled over with a transporting melodicism only rarely attained in any field of music. The Raney group came close, but, featured as it is here, only on 78rpm recordings, that lineup is better documented on live recordings, notably Jazz At Storyville (Roost, 1951), where opportunities to stretch out were seized. Getz said, of playing with Brookmeyer: "We seem to be on the same wave-length musically and personally. We complement each other naturally...We have the same yearning for fresh, uncluttered, melodic improvisation." Those last four words sum up the three Interpretations albums (if Getz had added a fifth word, it should have been "swinging"). Getz and Brookmeyer solo with exquisite, muscular lyricism, and in their shared theme statements and dual-improvisations, attain levels of spontaneous interplay reminiscent of early New Orleans bands, yet on harmonically more complex material. Drummer Frank Isola and bassist Teddy Kotick pretty much stick to time keeping, but pianist John Williams is a third, notable soloist. The Interpretations albums are of a quality akin to the iconic Getz/Brookmeyer 1954 live set Stan Getz At The Shrine, whose studio-recorded "filler" tracks are included in this box set. 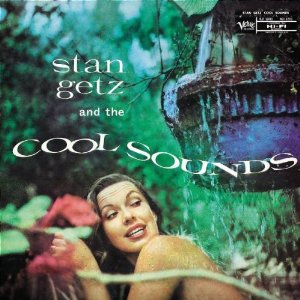 More facts and stats: Quintets: The Clef & Norgran Studio Albums collects, in chronological order, 45 tracks recorded for Clef and Norgran during a 26-month period starting December 1952, the second half of which was interrupted by Getz's imprisonment for the use of narcotics. The first 16 tracks, originally issued as singles, were subsequently released as the 10-inch LPs Stan Getz Plays and The Artistry Of Stan Getz. 17 more made up the three Interpretations albums. Other tracks, including two with a quartet featuring drummer Max Roach, were originally tacked on to, or partly comprised, Stan Getz And The Cool Sounds, the otherwise live Stan Getz At The Shrine and the various artists disc Tenor Saxophones. There are a couple of discrete EP and single versions. Two previously unreleased alternate takes and one previously unreleased alternate version complete the set. Getz shares the frontline with Raney on the first dozen tracks, and Brookmeyer on most of the others. Chet Baker-like trumpeter Tony Fruscella replaces Brookmeyer on the final two tracks, from January 1955. The three discs have a total playing time of around three and three-quarter hours.

The three discs are presented in a 7-inch square, hardcover "book" format, printed on heavy gauge card and paper, and packed with facts, photos and original album sleeves. Ashley Kahn opens with a 12-page introductory essay, which is followed by a six-page photo section and 13 pages of credits, a sessionography and discographical notes. The three discs, and their original LP sleeves, follow in separate pockets.

It's nice artifact; but the real voodoo is in grooves. Breathtaking and peerless.

Tracks: CD1: Stella By Starlight; Time On My Hands; 'Tis Autumn; The Way You Look Tonight; Lover Come Back To Me; Body And Soul; Stars Fell On Alabama; You Turned The Tables On Me; Thanks For The Memory; Hymn Of The Orient; These Foolish Things (Remind Me Of You); How Deep Is The Ocean?; Have You Met Miss Jones?; Erudition; Cool Mix; Rustic Hop; Love And The Weather; Spring Is Here; Crazy Rhythm. CD2: Willow Weep For Me; The Nearness of You; Pot Luck; Minor Blues; Fascinatin' Rhythm; I Don't Know What Time It Was; Tangerine; Pot Luck; It Don't Mean A Thing; I Hadn't Anyone 'Til You; Down By The Sycamore Tree; With The Wind And The Rain In Your Hair; Nobody Else But Me; I Hadn't Anyone 'Til You; Nobody Else But Me. CD3: It Don't Mean A Thing; The Varsity Drag; Give Me The Simple Life; Oh Jane Shavely; I'll Remember April; We'll Be Together Again; We'll Be Together Again; Feather Merchant; Flamingo; Blue Bells; Round Up Time.