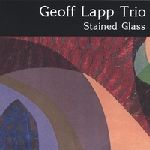 Pianist Geoff Lapp and his trio are in high demand in their native Montreal, Canada, and if Stained Glass is any indication of how the group plays live, it is easy to see why.

The reasons given for entitling an album are many times not clear. "Stained Glass" evokes an image a church window, or maybe a Tiffany lamp, and the metaphor could be extended to many small pieces of different colors making up the whole, creating a brilliance that is more than the sum of the parts.

Looking at this fine album in this manner makes a lot of sense on two levels: Lapp's playing individually and the trio's playing as a whole.

Lapp's clarity of touch and exquisite control of dynamics, combined with his innate sense of when to leave space to breathe, makes his playing conversational and personal. He also has what seems to be an endless well of ideas which, however, are not merely strung together. Rather, he changes octaves, changes densities or changes hands in order to maintain interest.

All this is done effortlessly, with no muss or fuss, but there is an intensity present and no single phrase is a throw-away. The energy always moves forward with a clear dramatic arc. In this regard, the efforts of his band mates—bassist Paul Johnston and drummer Dave Laing—are invaluable.

That any musical group should listen to each other and play as a group, rather than individuals, is a given; but for a piano trio it is imperative. Since the piano is a percussive instrument, care must be taken to keep the bass and drum voices separate but equal.

Laing is a delicate drummer who uses little bass drum, making himself felt with cymbals and snare. Both are played lightly with infinite variation, the cymbals creating a sheen that surrounds the music, while the emphatic tap of the snare provides the pulse. His swing is light, tight and propulsive, energizing the music without being overbearing.

Johnston's melodic bass playing creates synergy as his solid tone pushes the music forward with a forceful grace. The times he follows Lapp's left hand are startling because they are perfectly in time and pitch, serving to highlight the importance of the rest of his work.

Put this all together, and you have a winning combination, epitomized by the beautiful "Sweet Lorraine." Played with a light and elegant but deep swing, the variations flow for seven minutes, and could easily have gone to fifteen.

These guys are that good.

Sunny Rays; Elsa; With A Song In My Heart; Day Dream; Kathy's Waltz; Yo Bro; Theme For Margaret; Zack In The Box; Sweet Lorraine; The Party's Over.