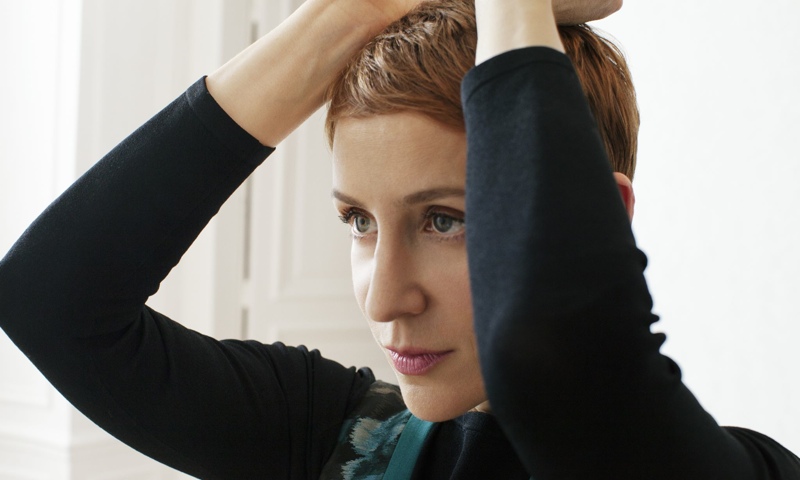 I’ve always experienced music in a very vivid way and have always expressed myself in singing for as long as I can remember. Music is the doorway to my soul, whether listening or performing...
—Stacey Kent

Stacey Kent is a unique talent in the world of jazz with the ability to illuminate a stage through her enthusiasm and artistic zest for performance. As an international jazz singer, she can be described as an insightful storyteller with the inner gift to bring to life the human experience through her music with an honest candor that is respectable in many ways. As seen in the collection of her Blue Note recordings, Kent's musical gifts are truly unique in her lyrical interpretation through the art of singing. When she steps center stage, she draws in her audience with her uncanny ability to sing a simple love song in variable degrees of emotional intensity transforming the moment on stage from a concert to an intimate conversation on life and love.

As it would follow, Kent's artistry has attracted attention to her career on the level of a Grammy nomination and a BBC Jazz Award for Best Vocalist. She accepts it all with humble gratitude and at the same time with the foresight of looking beyond the accolades. Kent's focus is non egocentric and more humanitarian in terms of her inner drive. Kent is committed to create music that matters for the greater good. She is about the business of creating music that lasts,music that can reflect solutions to life's challenges, and music that can transform a moment in song into a message of hope. When it comes to preference of genre, she has a direct kinship with the rhythmic flavors of Latin jazz.

Kent's love affair with jazz emerged from her global travels and emersion into world cultures, music and art. Her personal affinity for languages of the world led her to study French, Portuguese and English. She has defined a niche for herself as a musical artist with a fan base that represents people from around the world drawn to her music regardless if they speak the language presented in song. She found her identity and inner connection with the rhythms of Bossa Nova with her introduction to the music of Getz/Gilberto. She discovered her delight for singing in French from her educational travels to France. It was notably in Paris, France where Kent would find herself recording her first live CD of her career.

Dreamer in Concert (Blue Note, 2011) is Kent's first live CD release and her third full project release with Blue Note Records. It is a testament of the artistic synergy between Kent and tenor saxophonist, Jim Tomlinson, her musical soul mate and husband. Their likeminded approach to creating music comes together seamlessly throughout this CD release offering a refreshing diversity of the fusion of the symbiotic flavors of Latin jazz. Both the live and bonus tracks mirror Kent's objective to take the art of song interpretation to new levels of expression guided by the heart of a woman in love with life and romance.

Dreamer in Concert contains a selection of classic standards from the Great American Songbook like Cy Coleman's "The Best is Yet to Come," George Gershwin's "They Can't Take that Away from Me," and Rodgers and Hammerstein's 'It Might As Well Be Spring' . Classic French songs include "Samba Saravah," "Jardin d'Hiver" and "Jardin d'Hiver" . In addition to the classic American and French selections, the CD delivers bonus tracks such as "O Comboio," sung in Portuguese and written by Portuguese poet, Antonio Ladeira and Jim Tomlinson.

In the broad spectrum, this project represents a modern renaissance work built upon musical arrangements that include a mixture of rich jazz styles ranging from Bossa Nova grooves, classic jazz, and smooth Latin jazz. Kent 's breezy vocals are elegant and rich in feeling throughout the project representing her characteristic style as a gifted storytelling songstress. The live tracks included on this project were recorded at one of the most popular theaters in the Montmartre district of France namely, La Cigale in the city of Paris.

"Dreamer" is aesthetically memorable as one of the live single recordings of the release. The lyrics effervesce about the rejuvenating novelty of falling in love. Kent emotes through the lyrics about all the places that she dreams of traveling to with the love of her life.She sings of spending time together growing deeper in love from precious moments shared. This particular song represents a smooth and sultry track with Kent singing in the pocket to the swaying acoustic rhythms of Latin guitar strums setting the tone for a romantic Bossa Nova groove.

"Postcard Lovers" is a love song that Kent masterfully delivers touching on the subject of a break up. She sings of the story of a relationship that slipped away in a broken love affair. Kent brings reality to reason in the lyrical delivery of how her love continues to live in her heart in spite of the fact that they are miles away. Kent sings of the memories left behind and the occasional postcard that she receives and cherishes. Her soft vocals create a powerful dynamic in this song driven by a solid track with soft bass riffs that glide with Kent's vocals leading the way. Kent's phrasing is effortless as she moves the melody and story of the song from to start to finish accenting the theme of the power of memories of a true love.

"Ces Petis Riens" is a song of triumph of getting over a heart ache. Kent sings in a playful tone asserting that her heart is now healed from the pain of a breakup. It is a song that is bouncy with the subtly of the blues inferred. Kent sings in the French language in a cool,laid back mood blending with solid stand up bass riffs accented by rhythmic Latin percussion. The result is the creation of the ambience of a hip jazz groove with Kent singing on top of the musical wave of being released from the pain of a heart break. She sings this tune with the metaphorical finesse and expressive style that represent the essence of the beauty of her jazz artistry. This track's arrangement moves the song from a soft groove at the start of the song to one that is deeply emotional as it progresses giving Kent enough room to stretch out and capture the moment with her vocals.

Kent is true to form in her intimate interpretation of Rodgers and Hammerstein's classic, "It Might as Well Be Spring." She starts out creating a thoughtful atmosphere in the air with the signature lyrics, "I'm as restless as a willow on a windstorm...I'm as jumpy as a puppet on a string." Kent's soft vocals glide on the melody and the rhythms creating the effect of a personal conversation with the listener that is prolific.

After listening to the repertoire of Dreamer in Concert in its entirety, it can be said that it is one of Kent's most outstanding recordings to date setting the bar high for live recordings of its kind. With a mixture of songs in a variety of languages and Latin jazz styles all in one CD, Kent has united the world to come together on this particular project and explore it without the need for language fluency concerns. Her storytelling abilities are universal in sharing the emotions of falling in love, a woman's heartache, and starting over. The human artistry embedded in each track within this CD both in interpretation and musical presentation override the subject of language in and of itself. Each song is a work of art that stands on its own thanks to Kent's musical phrasing and performance in delivery that is original in every sense of the word. No formulas or repeat riffs from Kent. Each song is sung uniquely with varying melodic rhythms that deliver to the listener a series of songs in the key of universal conversation.

As she explores the meaning of love, falling in love and facing the pain of a love lost, she opens herself to the world and shows how she can be poignantly open in emotional expression of the highs and lows of love's challenges in real time with the motive to inspire. The CD is engaging through the true to life lyrics that paint the picture of the joys and challenges of romance as Kent serenades her listener through the journey to uncertainty when it comes to the romance experience. The project presents the unspoken concept to a listener to give love a chance if they haven't already or mend a broken heart if they haven't already with the prescription of the day being the music.

What can be said about the inner essence of the woman, the musical artist, Stacey Kent? After listening to this particular CD, I am confident to say that she is so much more than a jazz songstress. She approaches singing as an artistic painter creates a thoughtful color portrait. She is organic, instinctual and emotionally honest throughout her live concert and studio selections. After the earphones are taken off, the result that was left in the silence is what I would call the Stacey Kent Experience, the after effect that occurs at the end of a concert where an individual leaves with a warm and fuzzy feeling inside of their being that they received what they came for as well as what they needed to hear.

When asked about her inspiration and the message behind the music, Kent shared:

"When I was a little girl, my parents always had music on in the house. My mother played Chopin on the piano and I would sit by her feet and take it all in. I loved the voice of Maria Callas as a little girl. I could not have explained back then but I felt it: that balance between her strength and her vulnerability. Music is a great unifying force. In Music, we are able to reach for universal truths that transcend cultural and national boundaries. So when I'm traveling, what strikes me is, despite the superficial differences, how fundamentally similar we all are. Performing music for me is about expressing my own vulnerability and humanity."