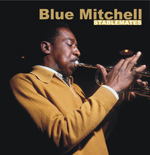 A luminous chunk of late-period Blue Mitchell—remarkably, on CD for the first time—Stablemates was recorded in '77 in Los Angeles. It stacks up well against the trumpeter's fine work for Riverside and Blue Note in the late '50s and '60s.

By '77, after the punishing decade-long combination punch of acid rock, funk and emergent disco, the market for live straight-ahead small-group jazz was on the ropes. Big bands and MOR singers still had a niche, and Mitchell—a superb technician as well as a supremely lyrical soloist—was fortunate to be able to earn a relatively steady income as a featured sideman with Louie Bellson, Tony Bennett and Lena Horne. (Earlier in the decade he'd been obliged to go back to his jump and R&B roots with the Ray Charles and John Mayall bands.) He continued simultaneously to keep alive the hard bop flame he'd set alight with Cannonball Adderley and Horace Silver back in the day, working with fellow Los Angeles resident, tenor saxophonist Harold Land and putting together one-off recording projects like Stablemates.

The set is a sequence of fleet up-tempo romps broken up by two ballads, "Portrait Of Jenny" and "I Can't Get Started." Mitchell's singing tone and effortlessly swinging attack are as strong as ever, and his musicians—who, aside from Victor Feldman, lack individual personality—are muscular, technically accomplished and have an easy confidence in themselves and each other. The band obviously enjoys the experience, and the feeling is infectious.

Feldman's work is a pleasure throughout, his pretty single note runs and contrasting block chord enthusiasms, both enjoyably off the Al Haig block, perfectly complementing Mitchell's soulful melodicism. Both men are especially on-song on a gorgeous reading of "I Can't Get Started."

Very sadly, Mitchell died at only 47, two years after this album was recorded. He still had much to give—including this solidly enjoyable set of amiable, good-time hard bop.

Stablemates; Portrait Of Jennie; There Will Never Be Another You: Getting Sentimental Over You; I Can't Get Started; Ow!.