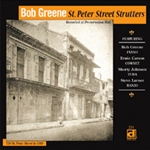 The more time passes the more important it becomes that traditional New Orleans jazz, like the music on St. Peter Street Strutters, is restored to the public domain. This might not be so much because of the music's history, however, as much as it's due to the fact that the playing of such vintage jazz in this day and age would perhaps sound only like the coldest form of repertory. When the results are as joyous as this 1964 recording, such contentions don't matter.

Pianist Bob Greene recorded for Blue Note in 1951, over a decade before this music was captured for posterity, and by 1964 he was working as a documentary producer for the United States Information Agency. If this suggests a casual approach to his music, then this recording refutes that nicely. Musicians able to play in the traditional styles might have been around in abundance in the 1960s, but arguably few of them were able to capture the flavor of the music in the way the musicians do here. The band skillfully avoids hokum on Jelly Roll Morton's "The Pearls," imbuing the piece with a zip that could easily act as a counterpoint to merely reportorial playing.

On "Some Of These Days" cornetist Ernie Carson rips through the theme like a man whose life depends on it, and Steve Larner is a rhythm banjo player whose deftness of touch is the antithesis of the plodding to which this instrument is often associated. His work with tubaist Shorty Johnson, whose capacity for laying back on the beat has the odd effect of making him sound like an approximation of Pops Foster on string bass, ensures just the right amount of drive.

"After You've Gone" might have been a war horse even almost half a century ago, but this doesn't seem to matter when the band combines enthusiasm, skill and love in equal measure. They never lose sight of the fact that this is music that belongs out in the big wide world as opposed to a museum, which is of course equally true of Morton's music. The band's reading of his "Mr. Jelly Lord" removes the bragging veneer from the title and makes the music a thing of joy, with Carson's lust for life propelling every note he projects.