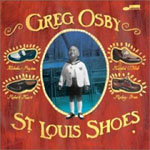 It takes time to assess St. Louis Shoes. In fact, to wax intellectual about the process, it requires the exegetical approach usually reserved for vast, inter-textual novels like Dr. Faustus or Gravity's Rainbow. Each encounter reveals ever new intrigues, insights, and moments of grace. And just like with Faust, you?d better go back to the source material.

Each of the nine tracks on St. Louis Shoes is based on another composer's work. Through these, Greg Osby gifts the listener with a treatise on sax styles, displaying a range of tone moving from Hawkins to Young, Parker to Hodges, and finally, to his own unmistakable diamond-hard, angular voice. However, Osby has not produced a tribute album. Everything resonates with his own style, and nothing can be set aside as simply another take. This is jazz inter-textuality and it sounds great.

St. Louis Shoes opens with a direct reference to Osby?s birthplace, ?St. Louis Toodle-oo.? This bold reconfiguration of Ellington?s seminal work begins slowly, the opening retaining much of the original material. However, it quickly builds on the latent threat implicit in Ellington?s rhythms, thickening to enhance the sinister quality, so that in the end it feels as if you have traveled into the depths of St. Louis, and into a musical vision completely Osby?s own.

Initially, Osby?s performance of the next track, ?Shaw Nuff,? sounds like what Parker might have laid down had contemporary recording quality been what it is today, and the LP already in existence. However, this is not straight emulation or resurrection. With Payton as antagonist, Osby bends and twists the original, extending it into a six minute wild ride.

Conversely, ?Light Blue? comes in at just about half the size of Monk?s original. As always, Monk?s idiosyncratic yet sophisticated structure provides fertile territory for improvisers willing to delve into the material. Osby next turns to ?Whirlwind Soldier,? written by contemporary vocalist, composer, and former co-member of Osby?s M-Base project, Cassandra Wilson. By including a contemporary piece, Osby indicates that this project is not about reclaiming the past through homage. It's about improvisation and innovation, something that can be accomplished when working off of the latest as well as the oldest material.

Osby ends his album by returning to one of jazz?s oldest works, ?St. Louis Blues.? Originally written by W.C. Handy and first recorded in 1920, ?St. Louis Blues? was popularized by Louis Armstrong in 1930. Osby?s takes this wealth of history into account, proceeding at a slow tempo to accentuate the piece?s blues mood. Referenced are Armstrong?s succinct note placements, Gillespie?s faster, more dynamic lines, as well as the Latin-influenced rhythmic deviations of Gillespie?s big band arrangement. Green keeps the piece moving with a frenetic but soft rhythm, while O?Neal?s piano work stands out here as particularly adept.

It takes time to assess Osby?s St. Louis Shoes. Time to listen, to think, to sift through old albums and memories, then to listen all over again. There is a wealth of material here. Listen and see what emerges for you.