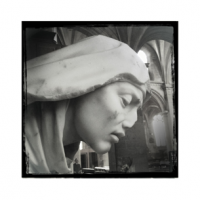 French double bassist Benjamin Duboc belongs to the elite of the European free improvisation scene. He is a musician with a unique command of the bull fiddle, employing a wide array of inventive and original extended techniques. But he is also an improviser that charges each of his solo performances with captivating emotional power.

His latest solo album was recorded in the church building Eglise Saint- Martin in Bignac in the western part of France in April 2013. The recording is dedicated to the memory of Christope Bart, who hosted the recording of Duboc and trumeter Itaru Oki (Nobusiko, Improvised Beings, 2010).

The first piece is a quiet, 20 minute reading of the traditional folk song "St. James Infirmary Blues," that was made famous by Louis Armstrong and later canonized as a jazz standard by Duke Ellington and Cab Calloway. Duboc repeats the lyrical melody slowly, playing only pizzicato and stressing the emotional core of each of the basic notes of the melody. The deep-toned melancholic mood of this song resonates beautifully in the space of the church.

The second piece is a free improvisation titled after the church. Duboc uses his bow in various techniques to structure a series of tensed and fierce sounds and to explore delicate multiphonics and harmonics. His double bass becomes a sound generator of metallic outbursts, abstract drones, industrial buzzing sounds, and resonating percussive sounds. All performed with expressive focus and reserve.