By KARL ACKERMANN
October 28, 2013
Sign in to view read count 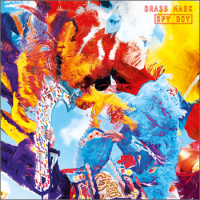 The UK based octet Brass Mask was conceived in 2012 by reedsman Tom Challenger. Challenger, who very recently released the unique Wedding Music duo recording with Kit Downes (Loop Records, 2013), has plied his trade with the likes of Django Bates and many of the young improvisers that make up the progressive Loop Collective. On Spy Boy, he has assembled a cutting edge group whose interplay makes for a mesmerizing blend of compositions influenced as much by New Orleans as by the avant-garde.

"Onnellinen" opens at a loping pace before the intensifying horns ratchet up the energy level. Here—as in other pieces—the influence of the fabled Mardi Gras Indians is evident. While Brass Mask embraces the historical gumbo of New Orleans street music, they bring more to these pieces than the genre implies. The group frequently spikes compositions such as "Francis P" and the gospel-tinged "Indian Red" with unexpected constructs and more abstract voicing. Theon Cross's tuba fills the traditional bass role and with drummer John Blease's razor sharp pacing keep the sound persuasive, clean and contemporary.

Brass Mask's alter ego is decidedly edgier with Challenger's compositions influenced by Henry Threadgill's Just The Facts and Pass The Bucket (About Time, 1983). The eclectic nature Threadgill's classic informs Brass Mask's bridging of genres and generations of jazz. This is nowhere more evident than in "I Thank You Jesus," a combination of ragtime and dirty blues featuring some emotionally charged improvisations that approximate both the mournful keening and the celebratory rebirth of a New Orleans funeral march. In a different vein, "Wizards" has a cinematic feel with dark atmospherics punctuated with horn blasts.

The members of this octet concurrently spread themselves across a half-dozen other groups and that doesn't bode well for the longevity of Brass Mask as a musical entity. However— individually or collectively—this ensemble makes mutually adaptable the transitory and the enduring aspects of interpreting music. The high-spirited compositions are played with an engaging mix of unperturbed patience and energetic surges. Brass Mask has a meandering big sound full of group and individual improvisations and Spy Boy delivers a debut that begs for a sequel.