By JACK GOLD-MOLINA
March 1, 2016
Sign in to view read count 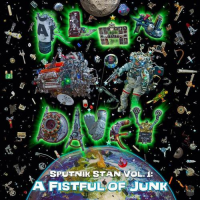 The most recent solo outing by Alan Davey, Lemmy's former replacement in the space rock juggernaut Hawkwind, is a CD/colored vinyl LP that comes with a comic book. The artwork of the comic book is finely detailed and closely follows the lyrics of the songs, giving the reader and listener a vivid picture of the life of Sputnik Stan, who runs a space junk salvage operation. For the uninitiated, while there are great things in space, there is also a lot of junk, including old satellites, parts of ships, and garbage that gets ejected during missions.

A complex project, this is a solid, heavy space rocker. Davey does most of the instrumentation, along with vocalist and musician Kevin Sommers, who also created all of the artwork. The tracks on the album lead into each other with a spacey, psychedelic theme that runs throughout the story. Echoing synths with distant radio voices create the impression that Stan is isolated. In the tune "Wakey Wakey," Stan seems either stoned or bored, and confirms his feelings in the lyrics, "Some day this mission is gonna end."

On "Magnetosphere Disturbance," with voices in the distance echoing with synths like the light of stars, the music becomes darker with the lyrics, "Magnetic disturbance, just the thing I need." The rhythm of the tune drives —the music far beyond post rock —and dual guitars work over the synth background until the time stops with the sound of machinery, an alarm. On "Hubble's Looking Tasty These Days," a slow ballad about space and time shifting out of phase, Eclectic Devils and Yaga Sunet vocalist Zoie Green captures the emotion of Stan's isolation in his longing to hold a woman while he watches the Hubble telescope drift by.

The guitar melody played against the synth on "Stoic" is almost math-like, with Sommers singing the lyrics, "Don't show shame, don't show fear," reminiscent of the late Robert Calvert. While "Delysid Funky" is a mid-tempo rocker, the guitar soloing with the lyrics, "Out of the speakers sound and waves, there's nothing coming after you," "Weigh It In Tranquility" starts out rocking hard with dual guitars soloing off of each other. The rhythm is solid and driving with Davey singing the lyrics, "I'll weigh in the whole damn fleet, it's obsolete, it's a hazard."

There are often feelings conveyed of paranoia and isolation, but this isn't an album about giving up. Stan has a job to do, and he does it well. On the final tune, "18 Engines, One Mission," the guitars are driving with tremolo against heavy synths. Davey sings, "I'm set to go...I am Sputnik Stan," as he brings this chapter to an end, Stan working out a deal with someone for his cargo.