Spiro: Making Music that is Dispassionate and Emotional 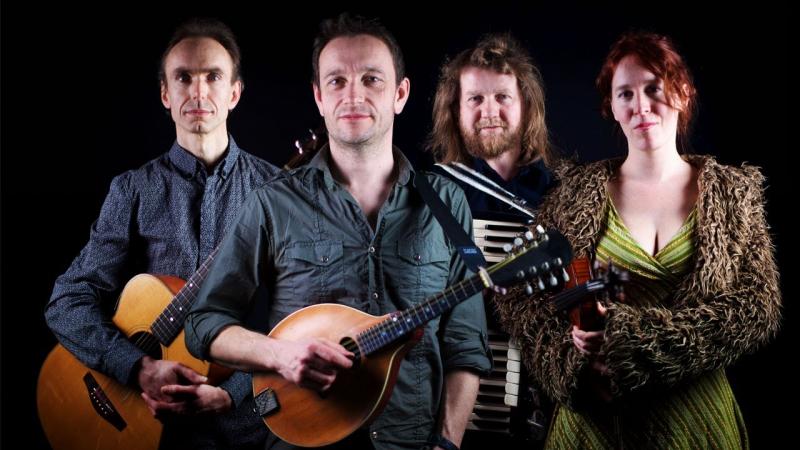 By NENAD GEORGIEVSKI
July 31, 2015
Sign in to view read count
The Bristol four piece ensemble Spiro makes music that straddles and bridges a multiplicity of genres. With each consecutive album it redefines what it means to be a strings ensemble. It constantly breaks every boundary imaginable, but above all it's aim is to make gorgeously joyous music. It's music has a strange effect on one's senses. Upon first hearing it feels like gentle tingling and suddenly its mesh of sounds and melodies awakens you and moves you. It's an understatement to say that the ensemble's far—reaching explorations have expanded the audience both for folk, experimental or classical music as literally all of these different genres of music mesh in an unusual and most imaginative ways. The result is music that falls in a category that is uniquely its own or Spiro's music. The band came together in the early '90s as The Famous Five, but later changed its name into Spiro. Spiro went to release a string of records that are delightfully unclassifiable and immensely creative. Recently, Spiro released a new record titled Welcome Joy and Welcome Sorrow (Real Word, 2015) that confirms again how unconventional and engaging the music of this band is.

All About Jazz: The band has been active for 25 years and so far it has released 5 records. What is unique about the creative partnership the band members share?

Spiro: I think we've stuck together because we never stop finding it exciting. There always seems to be a special energy when we play together. And bizarrely we still like each other after all this time. Most of the time.

AAJ: Where did the name Spiro come from? (In my native country it is a common first name)

Spiro: We chose the name because for us it didn't strongly suggest any particular musical style and would give us carte blanche. It has different meanings (and pronunciations!) for different people. For us the connotations were of breath and circular movement, both of which felt fine. For us Spiro rhymes with biro, not hero.

AAJ: Please describe the chemistry the band shares and how it informs the music the band creates.

Spiro: We're all very different in our musical tastes and approaches to writing. If we ever find ourselves playing something that alligns to an identifiable style, we scrap it. What we share is a desire to make music which is simultaneously dispassionate and emotional, making something that by rights should not be moving but strangely is.

AAJ: How has the band's chemistry evolved since the band's debut Lost in Fishponds (released under the banner of the Flaming Five) to the last Welcome Joy and Welcome Sorrow ?

Spiro: It was the Famous Five, which is nowhere near as good as the Flaming Five—where were you when we needed you? Well we all started with a common love of traditional music, playing in trad sessions. We used to get outrageously drunk and play very fast, apart from Jon who tried to keep everyone else in check. Jon was the old lady in the park, walking three amphetined dogs tugging at the leash and often getting pulled ungraciously along by them. It was a lot of fun and probably quite exhausting to listen to.

It was Jane who started to pull in elements of systems music, and both Jane and Alex who had an ear for disonnance. Pole Star was our first emergence as Spiro, and the name change seemed appropriate. Alan James heard Pole Star (Real World, 1997) and loved it but it wasn't until ten years later that he became our manager. This was swiftly followed by our adoption by Real World, which had a huge impact. Their support has been amazing. We felt like the family had expanded and we've never stopped appreciating them. Then when our agent Terry O'Brien joined the team we started playing live more, and more outside the UK than before. So we've been spending a lot more time playing and growing together musically. There's no subsitute for that.

AAJ: How has the group evolved from a personal relationship standpoint?

Spiro: It's evolved from being a bunch of drunken mates into being a kind of family. We're stuck with each other now. Fortunately we've always shared a similar sense of humour, which helps keep us vaguely sane.

AAJ: Please talk about the meaning behind the record title of the new album?

Spiro: It's a line from a poem by John Keats advocating the embracing of everything life throws at you without judgement. The album seems to cover a wider emotional palette than previous albums, but in a way that feels more cohesive.

AAJ: Was the dynamic flow of the pieces carefully architected or was it an organic outgrowth of performing them together with the band?

Spiro: Both. Although it's all constructed with great care, we cannot predict what happens to it when we start performing it. It seems to feed off the energy in the room, most of which must come from the audience. That's the really exciting bit. You see it growing in front of your eyes during a performance. So each piece feels different each time we play it.

AAJ: The core of the band's playing successfully balances between folk and various other influences. How do you negotiate between folk and classical sounds, improvisations, minimalistic pulsations and the delicate mesh of sounds that the band manages to create? Can you please give some insight into the band's creative process?

Spiro: Jane is our secret weapon. She takes all the elements that are flying around, feeds them into her strange brain and lies awake at night for a week or so. She will combine things that have no right to belong together in ways that have no right to work. She also writes many of the riffs and tunes. Alex contributes a lot of the really angular riffs and often introduces rhythmic tension. He and Jane are the riffmeisters and dissonance creators. Jon is most interested in tunes and linear strucutre, and aims to play as few chords as possible to inject some simplicity and to keep his job easy. Jason specialises in playing impossible combinations of all the elements at the same time. Sometimes he's playing three parts at once.

AAJ: What motivates you to stretch your boundaries so far?

Spiro: Perhaps there's one fundamental default human drive to be individual and without boundaries, and another drive to fit in and be accepted. I guess for us the first drive is just stronger than the second. We all need the second drive however—people have to be able to understand what you do, otherwise it's like a foreign language and makes no sense at all. We try to ride the line between the two approaches.

AAJ: How do you look back at the making of Pole Star?

It was exciting because it was the first time we really discovered our sound. And it was all happening in amidst the brilliant Bristol music scene at that time. It felt like we had created something that was difficult to categorize. Unfortunately this made us very difficult to market and we remained in relative obscurity for the next twelve years, until Real World picked up on us.

Spiro: We didn't really meet her, she just stuck her head round the door and said she liked the sound of it. Massive Attack were recording Mezzanine (Virgin, 1998) in another room upstairs at the time.

AAJ: The burgeoning music scene in Bristol has a reputation for innovation, experimentation and quality. In the past it succesfully transcended the status of current flavor of the week status and the scene established itself as a long term musical hotspot. To what can you attribute the quality and the diversity of the music that comes out of that city?

Spiro: Yes in the mid nineties especially it became apparent that Bristol had become a brilliant city musically. It's hard to know how it evolved. I guess so much of it is down to the individuals who have happened to have been living here. And once a scene gets created it generates its own momentum.

AAJ: To what extent did this scene influence Spiro's music (regardless of genre)?

Spiro: We were all really excited by what we were hearing, and more than anything I think it engendered a sense of possibilty, made us feel yes, you can do what the hell you want. Perhaps it gave us more confidence to experiment.

AAJ: How did the collaboration with Adrian Utley of Portishead, that resulted in a record called The Vapourer, (Real World, 2013) come about and what do you make of the final outcome?

Spiro: Adrian was already working with Moogs and Alex suggested he try doing something with one or two of our pieces. It seemed like a natural avenue to pursue as we're very interested in electronica, so it was great to hear what our music presented in that way, unfettered by the preconceptions associated with using folk instruments. Both approaches are exciting in their own way.

Spiro: Backbone is a good word, as that's often exactly what the tunes provide. So we go for tunes that have a strong linear structure that we can use to inform the structure of the whole piece. But we also go for tunes that seem to have an emotional depth without sentimentality. And tunes that don't sound like folk tunes, otherwise it can all end up sounding like some horrible fusion.

AAJ: What are some musical contexts that remain unexplored by the band?

Spiro: The human voice is an amazing instrument which we haven't yet used and would like to. But not as lead vocals—one thing we love about Spiro is that it's all about the ensemble, with no instrument saying "Hey, look at me!"