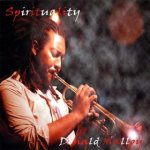 Jazz's most searing spiritual statement is not John Coltrane's A Love Supreme (1964, Impulse!); it was his recording, "Alabama," released a year earlier on Live at Birdland (1963, Impulse!). Written in the wake of the Ku Klux Klan's bombing of the 16th Street Baptist Church in Birmingham on September 15, 1963, "Alabama" was an improvisation on rage, sorrow, and loss in the cotton-humid climes of the pre-Civil Rights Act Deep South.

Spirituality is a ten-part tone poem composed and arranged by Malloy for his talented sextet. Malloy funnels the themes of Coltrane and Simone into simple etheric themes that operate in a mantra-like manner. Malloy is no Miles Davis acolyte. While adopting the master's use of space and silence, Malloy opts for the piercing tone of Freddie Hubbard, tempered with Lee Morgan and Donald Byrd. Malloy's solos bristle with energy and a tone like bullets hitting a bell.

Tia Fuller's alto and soprano saxophones and flute are a tonal match for Malloy's assertive approach. "UpLift" is brightly updated hard bop with a mild Latin beat pushing Malloy and Fuller through the descending head. Fuller's alto is full-bodied and self assured. "Oshun" features pianist Michele Rosewoman and vocalist Barbara Barrett, who doubles Fuller's special flute on the theme. Malloy is placed far back as the voice in the wilderness to effect a multi-layered texture.

Spirituality is Malloy's answer to Coltrane and Simone, 45 year later, when much distance has been covered—with even more left to go.