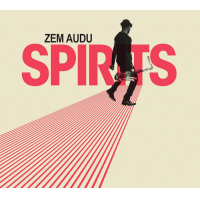 Saxophonist Zem Audu was born in Nigeria and raised in England before pursuing his musical career in New York City. Along the way, Audu has developed a musical sound that blends his cultural influences to express a musical style that is an amalgamation of: Contemporary jazz, Nigerian Afrobeat, Caribbean rhythms and funk grooves. Audu's album Spirits, released June 16, 2017 on Origin Records, is a musical statement that is fresh and diverse throughout the album's eleven tracks. Audu's in joined by a group of musicians that are also known for their musical diversity, featuring: pianist Benito Gonzalez, bassist Ben Williams, drummer John Davis and special guest, fusion guitar great Mike Stern on five tracks.

The genesis for Spirits, came from the deceptively tricky problem of trying to pin down the idea of home, from the perspective of someone who's lived all over the world during their lifetime. "The question I always get asked is, 'Where are you from?' I don't want to neglect that I was born in Nigeria and just say I'm English because of my passport. I don't want to not mention that I live in the States after being here for seven years. And I don't want to not mention growing up in England just because I live here now. I have to say all of these places because that's my story," explains Audu.

The core group on Spirits is comprised of Gonzalez, Williams, and Davis, all are longtime collaborators who can skillfully navigate Audu's diversity. With the addition of Stern's trademark chorused sound, warm distortion, soulful bends, volume swells, impeccable rhythm and liquid-lines, the music is taken to a whole different level. The opening track, "Neon Nights" is a fine example of the before mentioned qualities. The sultry electric funk is developed by Williams and Davis with Stern and Gonzalez developing colors while Audu riffs over the intro. The melody is pentatonic based, sing-able, and builds around developed motifs that convey the sheer musical joy of this group. Audu's tone is big and settled, his solo style is one of musical development and methodical building of excitement, all while interacting with the group members, especially Gonzalez. Stern's solo is amazing, the joy in which he plays is palpable.

"The different spirits and elements that have shaped my sound—and, looking at the macrocosm, that has shaped my life—all come out in this music," Audu says. "The broad range of music that I've appreciated and enjoyed, the different countries that all this music comes from, the different technologies that have influenced my production style, the energy and pressure of New York City. The thread that runs through this album is finding something that's very specific to me."

On "Bamijo" Audu and Stern join forces, to convey the slinky melody with the seductive allure of a great soul singer. Williams and Davis lay down the relaxed groove as Gonzalez' piano, plays a reparative rhythmic chordal motif. Stern solos first, sticking with his clean chorused tone, he bends and spins a relaxed story of musical delight. Audu builds the excitement with melodic lines interspersed with fast flurries. Gonzalez' solo is rhythmic and converses with Davis masterfully.

As imaginative as Spirits might be, it seems to be second nature to Audu, who effortlessly meets the challenge to balance the varied influences of the project and a bold musical statement. Spirits will reward the listener with sensitive enough ears to embrace things that might be more complicated or varied, yet building on the familiar for a sense of belonging.