By GERMEIN LINARES
September 15, 2005
Sign in to view read count 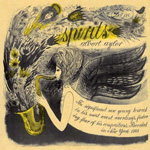 By the looks of it, Spirits seems like a no-brainer. The names on the cover look good: Albert Ayler, Henry Grimes, and Sunny Murray. But somehow the parts never add up, though. Sure, the album's four tunes wiggle plenty, producing the agitated jazz Ayler often preached; but, the motions on Spirits, unlike Ayler's better moments, resolve too very little. The album, originally recorded in New York in '64, came after Ayler's Scandinavian tour of duty with Cecil Taylor in '62 and '63. Murray and both bass players, Grimes and Earle Henderson, do good work here, nothing stellar, just enough to support the then-radical Ayler.

An obvious point of contention in discussing Spirits comes with trumpeter Norman Howard. Ayler's old friend from Cleveland is musically out of place on this album, with an odd, shearing, messy sound jamming the group's communications. To his credit, he's trying different things. But his labors bear few fruits, and in context with Ayler's already impressive acrobatics, they sound clumsy. The tunes are still searching for a proper vernacular, as well; they're shy and rough around the edges. True Ayler diehards will undoubtedly gobble this recording up, but those in search of quality best look elsewhere.