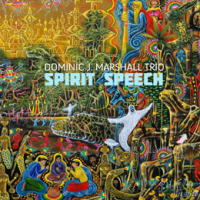 Dominic J Marshall has clearly absorbed a lot of influences in his 24 years. The pianist, born in Scotland and now resident in Amsterdam, brings many of them to Spirit Speech, the third album by his trio. Hip-hop, jazz, classical, folk: it's a disparate bunch and while it isn't exactly chalk and cheese there's still a risk that mixing them all together could create something unpalatable. Marshall neatly sidesteps the risk. Spirit Speech is proud of its influences but never overwhelmed by them: the result is refreshing and innovative.

Marshall's ability to mix his influences was apparent on his second album, Icaros (F-IRE Label, 2012). Hip-hop and electronica seem to be especially dear to his heart. His releases as a solo artist—such as Good And Bad Dreams (Self Produced, 2013)—reveal a writer/musician with a fine line in atmospheric electronic grooves. In the context of an acoustic trio—he's joined by Tobias Nijboer on bass and Jamie Peet on drums—Marshall puts more emphasis on his jazz roots, but it's the addition of these more contemporary influences that give his music its freshness.

The tunes on Spirit Speech are all Marshall originals. The trio shifts with apparent ease through the languid, late-night, ballad style of "Unflinchingly" to the graceful beauty of "Austin Peralta" (presumably a tribute to the young pianist who died in 2012, aged 22) and on towards the faster pace of "Enter The Void." In between there's the gentle swing of "Srividaya's Cells," "Justin"'s percussive punch and the lyrical phrasing of "Sleepwalking." There's a quiet confidence about this music and these performances, a maturity that belies Marshall's relative youth. It all bodes well for the future of the trio.