Slide Hampton and the World of Trombones: Spirit of the Horn 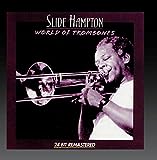 I wish my friend Bill Swanson were alive to hear this. Bill loved the trombone, and would have greatly admired this picturesque performance by Slide Hampton’s World of Trombones in concert at the Manchester Craftsmen’s Guild in Pittsburgh. This is wall-to-wall ‘bones, as Slide leads a dozen of the country’s finest through their paces and welcomes guest soloist Bill Watrous on Ray Noble’s “Cherokee,” Billy Strayhorn’s “A Flower Is a Lovesome Thing” and his own “Blues for Eric.”

Hampton, who turned seventy last year, is not only a marvelous player himself but knows how to bring out the best in a king-size section with diaphanous charts that accentuate the range and natural beauty of the horns and also swing. Slide scored the first seven numbers and “Blues for Eric” with the other arrangements by Todd Bashare (Herbie Hancock’s “Dolphin Dance”), bass trombonist Max Siegel (“Walkin’-N-Rhythm”) and David Gibson (his own composition, "Maya").

As a reward for their earnestness and artistry, everyone in the ensemble is given blowing space (and makes the most of it) on the breakneck finale, “Blues for Eric.” Hampton is featured on J.J. Johnson’s “Lament” and the ensemble’s tribute to Charlie Parker, “April in Paris,” and engages in horn-to-horn combat with Watrous on “Cherokee” and old hand Benny Powell on “Basin Street Blues.” Watrous, a master at using the horn’s upper register, is a triple-tongueing monster on “Cherokee,” an ardent romantic on “Flower.” He and the other ‘bones are supported by a supple rhythm section comprised of Willis, guitarist Marty Ashby, bassist John Lee and drummer Victor Jones.

More than two decades after its first album (on which Slide used eight horns and rhythm), the World of Trombones has made a triumphant reappearance, as luminous and entrancing as ever. Let’s hope it won’t be another twenty years or more before Slide’s World collides again with ours.

Cherokee; All in Love Is Fair; A Flower Is a Lovesome Thing; Tribute Suite -- Lament / Basin Street Blues, April in Paris, Lester Leaps In, Moment