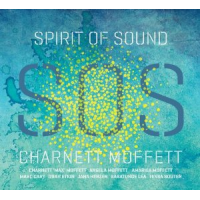 Bassist Charnett Moffett's first two releases on the Motéma imprint came out two years apart; his third and fourth releases for the same label—The Bridge: Solo Bass Works (Motéma Music, 2013) and the outing under discussion here—arrive a mere three months apart. His working pace has clearly quickened, but the quality of the music hasn't suffered for it. Both The Bridge: Solo Bass Works and Spirit Of Sound present an artist, interpreter, composer and conceptualist in his prime.

Moffett used his first release of 2013 to showcase his virtuosity and skill in delivering songs. His high level bass chops are also on display here, but this album is about creating soundscapes, not out-and-out songs. (Middle) Eastern tinged auras, circling patterns and swirling ideals are all part of this production, and "production" is the key word in that statement; Moffett, label head/label mate/duo partner Jana Herzen and manager/producer Mary Ann Topper shaped the album and gave it a glistening, celestial vibe.

The personnel on Spirit Of Sound changes from track to track, as various family members and label mates drop in and out, but the consistent presence of Moffett on bass(es), Angela Moffett on tamboura, and Max Moffett on drums creates a supportive foundation throughout. In a traditional sense, the guests are underutilized, but in the context of this album concept, they deliver what's expected. Amareia Moffett adds some wordless vocals to the underwhelming "Opera," Tessa Souter does the same on the bouncy, hippie-ish "Natural Heritage," and Herzen follows suit on the semi-psychedelic "Swing Raga." Angela Moffett rounds out the vocalist roster, reciting E. E. Cummings' words on "Seeker Of Truth" and Emily Dickinson's work on "Hope." Babatunde Lea adds some percussive coloring on a few tracks, pianist Marc Cary makes an appearance on one piece and multi-reedist Oran Etkin shows up twice, but none of them make a big splash; they simply fit into the overall musical formula of the day.

Much of this music is overly repetitious in nature, with vamping patterns aplenty, but Moffett's ever-stupendous bass work is the X factor that brings excitement and a sense of surprise into the picture. His technique, taste and overall conception for construction turns the potentially-bland into a flavorful sonic stew.