By DAN MCCLENAGHAN
October 29, 2018
Sign in to view read count 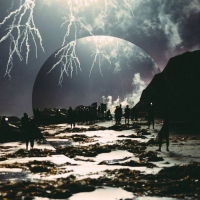 Russia-born pianist Nikita Rafaelov adopted Finland as his homeland, and music as his passion. He began with the classics at an early age before the inspirations of Bill Evans, Keith Jarrett and John Coltrane came his way. His jazz recording debut on Copenhagen, Denmark's Gotta Let it Out Records, Spirit of Gaia, is described as: ..."a different kind of solo piano album."

Rafaelov, not yet thirty years old at this writing, creates his art with an original voice, sculpting sound via multilayered piano tracks (and there is certainly some electricity involved at times) featuring elements of minimalism juxtaposed with majestic densities, ambient soundscaping and ritualistic repetition. The opening cut, the disc's title tune, sounds like the patient and grandiose mathematical movement of the solar system—Jupiter and the gas giants looming in the pianist's left hand, the rocky planets and asteroids in his right, sweeping through the void in a majestic astronomical rhythm. "Gnaw," the second tune, sounds like like a foundry, metallic and machine-like with a hypnotic pulse, bringing Swiss pianist Nik Bärtsch's ritual groove music to mind. "Places Oblivious" has the mood of a music box dropped into the alien ambience of a ominous foreign planet.

That opening combination of the pianist's peculiar "songs" announces singular talent. Rafealov says he was inspired by the idea that "nothing in the universe stands still" and "the meaning and the meaninglessness of our existence." Big concepts the pianist translates with adept and expansive focus.

"Kiertorata" could be music to accompany the grand spin of a nearby galaxy. "Second Wind" seems a soundtrack to the crowds of a teeming city, cranked into a manic fast forward; and "The Gift Of Moral Clarity" is lovely and ruminative, pure piano, closing the set perfectly on a simple note.

Few first recordings have the depth of vision or the grasp of the big story of Spirit Of Gaia. A marvelous debut.