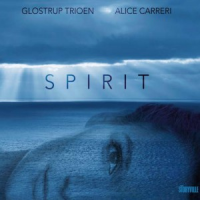 Some time between 1000 and 1197, the Danish village of Glostrup was founded by a man called Glob. In the 17th century it comprised eight farms and 13 houses. Today, engulfed as a suburb by the capital Copenhagen, it even boasts its own jazz trio.

Its members, Torben Kjaer (piano), Henrik Dhyrbye (bass) and Ole Streenberg (drums), have teamed up with vocalist Alice Carreri and Swedish tenor man Tomas Franck for this, their latest album.

It is claimed by the sleeve note to be primarily influenced by two classic disks, Miles Davis' Kind Of Blue from 1959 and John Coltrane's Ballads from 1963. To judge from the cover picture, Carreri would seem to be entering into some kind of spiritual fusion with the two jazz luminaries.

If so, there is little evidence of it in the finished product. In fact, there are so many mistakes, that a better, more accurate description would be unfinished product.

The main fault, sad to say, lies with Carreri. She fails to hit a great many notes and is sometimes downright out of tune. Her painful version of "That Old Devil Moon" is a contender as worst ever performance of the hoary old number.

This is a shame because the album opens promisingly with "Far Away Star," an arrangement of the traditional Swedish folk song, "Allt Under Himmelens Fäste," featuring English lyrics by the late Swedish actress (and friend of Greta Garbo), Signe Hasso, who turned it into a poignant bitter/sweet love song, only rarely heard today.

However, after this, we're off on a familiar trail of standards which have all been far better performed elsewhere. Those references to the Davis and Coltrane albums are presumably a bid to boost the album's jazz cred. They are in vain, though Franck does make a bold effort to save the day here and there, most notably with his solo on "Some Other Time."

One wonders what Glob would have made of it all.

Far Away Star; Some Other Time; That Old Devil Moon; Too Young To Go Steady; So In Love; Ne Me Quitte Pas; E Si Domani; All Or Nothing At All; Blue In Green.