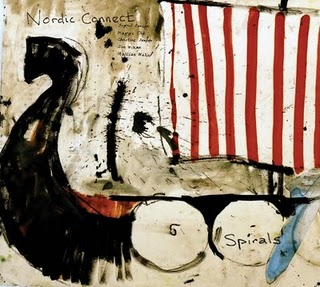 Flurry (ArtistShare, 2007), the debut disc from Nordic Connect, rang out loquaciously. In assimilating several moods, the music created an emotionally resolute ambience. Since the release of the CD, the band as toured Canada, the USA and Scandinavia, recording its follow-up,Spirals, at the end of 2008.

Pianist Maggi Olin wrote most of the compositions, with contributions also coming from trumpeter Ingrid Jensen, saxophonist Christine Jensen and drummer Jon Wikan. The charts are impressive and open-ended, leaving room for the players to extrapolate and permeate the atmosphere with a wealth of ideas. They transcend the mundane as they seek the unknown, finding it in an intense context, or in the snap of happy, dancing rhythms.

The Jensen sisters have made an impact on their own projects in the past. Here, they drive a symbiotic relationship to reveal a consummate understanding that gives each composition a larger framework, which they fill with intuitive progressions. "Earth Sighs" garners interaction through free investigation, its mood introspective, as the saxophone curls around the trumpet's long notes. Shadows are mitigated by rays of light from the rainbow of colors permeated by Wikan's cymbals, that soon expand to enhance luminosity. Change evolves as movements get pungent, some hot phrases on the trumpet abetted by cries from the saxophone. The evolution is complex and mystical, yet distinctive in its devolution and logic.

A martial air wafts across "Ballad North," which is wrapped in the gorgeous semantics of saxophone and percussion. Olin shows how space can be an effective communicator, letting her ministrations open doors that beckon bassist Mattias Welin for an eloquent conversation, before the intensity is burnished by the Jensen sisters, whose torrid intonations dissipate the calm. The whole has been crafted seamlessly with awe-inspiring creativity.

"Brejk ä Leg" is a well of rhythmic complexity. Electronics filter the head before the brass sails in. Olin fractures time, only to have the ensemble coalesce into undulating waves that temper the heat. Time never stands still, as tempo and pulse shift gears and surprise lurks and jumps out, making this cornucopia of sound an absolutely delightful closer. This, indeed, is soul-stirring music.