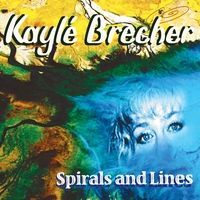 Sheila Jordan's name often comes up as a comparative reference point for those who are unfamiliar with the work of vocalist/composer/arranger Kayle Brecher; this link is an audibly obvious one on Spirals And Lines, but the connection goes deeper than sound. Jordan's uncompromising and creative voice, even more so than her literal voice, helped to put her on a pedestal in the eyes of the jazz vocal community, and Brecher taps into this spirit in her work.

Many a surprise surfaces on Spirals And Lines, as Brecher builds an eclectic program that's as American as apple pie, yet far left of the norm. The brass latticework that introduces the title track serves as a warning that this isn't a typical jazz vocal record and Brecher confirms this line of thinking time and again. Her reworked "When Johnny Comes Marching Home" sounds like a cross between Jordan and Laura Nyro, and she brings some New Orleans swagger into Bob Dylan's world on "Paths Of Victory." Kaleidoscopic swing adjustments inform her arrangement of "Brother, Can You Spare A Dime," and she proselytizes about an idealized America on "The House I Live In." The stripped down piano-and-voice pairing on this track does nothing to diminish its power and directness.

Brecher utilizes a large cast to make her musical points, but it's the key players within this cast that give the project its sonic identity. Chief among these musicians is sousaphone whiz Jimmy Parker. He fills the obvious gap left where a bassist would normally sit, but he does so much more than that. His horn is the cornerstone of performances like "Brother, Can You Spare A Dime" and "Paths Of Victory." Both numbers allow him to anchor the band while displaying his supportive, yet puckish-to-pugnacious personality. Pianist David Dzubinski proves to be equally important through his supportive and collaborative work, and guitarist Frank Butrey brings a bluesy sensibility into the picture.

Brecher's skills are many and varied, but her greatest strength may be her ability to balance the offbeat with the accessible. She never completely goes full tilt in one direction or the other. Instead, she finds herself—and defines herself—by living in the zone between both worlds; as an artist, that's a great place to build a home.

Spirals And Lines; High Flying Bird; When Johnny Comes Marching Home; Paths Of Victory; Will Of The Wind; Brother, Can You Spare A Dime?; The House I Live In; Noddin' Ya Head Blues; So It Goes.