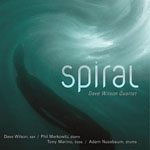 Saxophonist Dave Wilson was previously a member of two Dave Stahl groups, also playing with the likes of Wynton Marsalis, Tom Harrell, Lew Soloff and Conrad Herwig and studying with the great Joe Lovano. The New York native has released two previous collections as a leader, and is actively immersed in music as both an educator and a business person. Wilson's compositions and covers reflect an eclectic approach, featuring ballads, Latin influences, free improvisation and mainstream jazz. Wilson's and his quartet may well have produced their breakout effort with Spiral; a potpourri of jazz styles from sometimes unlikely sources, it nevertheless flows and holds together, thanks to the multiple skills of Wilson and his band.

The opening title track—appropriate to its name—does, indeed, spiral, jump and swing. Wilson's feverishly fast attack is matched by Phil Markowitz's blistering piano solos as the two set the improvisational tone for much of Spiral. The Richie Beirach masterpiece, "Elm," demonstrates Wilson's arranging skills, as he takes this complex piece to a place unique from the original. With its Latin approach and slower tempo, "Ocean Blue" represents a change of pace; Wilson's tenor and Markowitz dominate but, in the quieter surroundings, it is a good place to note the nuanced expertise of veteran drummer Adam Nussbaum, who guides and subtly shifts the rhythm throughout.

Perhaps the best display of Wilson's arranging skills are heard on the barely recognizable Grateful Dead classic, "Friend of the Devil." More up-tempo than the original (as opposed to The Dead's ubiquitous live versions), Wilson's rippling soprano bookends some great solo work from Markowitz, while bassist Tony Marino has sufficient space to platform his virtuosity. Always nearby in the mix, Marino doesn't break out often, but provides a deep, steady and creative backdrop for the saxophonist and pianist. Perhaps the most energized piece in the collection, Creed's "My Own Prison" is another standout rock cover, with Wilson's tenor at its gritty best. That rough-edged but fluid mood continues through "Movin' On," Wilson's self-described favorite piece on Spiral.

Should it appear that cover arrangements are the highlights of Spiral, rest assured that they are just part of the overall package. Wilson's own contributions account for more than half the numbers and they measure up across the board. Whether the focus is on melody or free improvisation, Wilson is more than up to the task and could not have found a more empathetic collaborator than Markowitz. Spiral is an inventive, high-energy collection with a number of very accessible compositions that should propel Wilson's career as a leader.

Spiral; Elm; Ocean Blue; Friend of the Devil; Summer Breezes; My Own Prison; Movin' On; Like GS 2; Remembering; Francisca; (You're the) Biggest Part of Me.